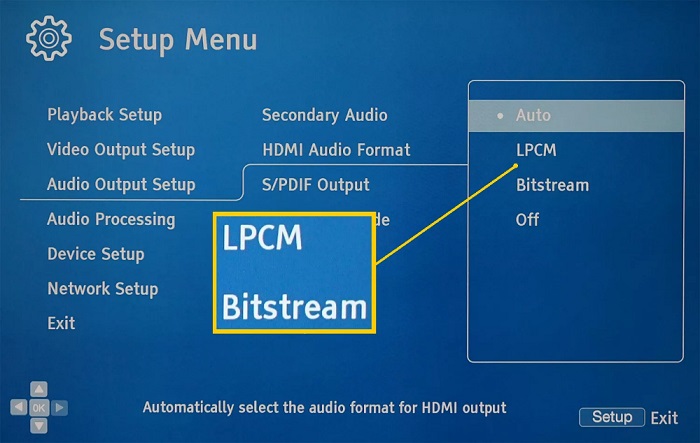 “Auto“, “PCM“, and “Bitstream/passthrough” are the 3 main digital audio output settings. They define how a source outputs audio information for processing and playback.

The mode you choose primarily depends on your audio system’s configuration and the quality of audio processors in your components.

To take advantage of superior audio processing on a soundbar, AVR, or preamp with a high-quality DSP (Digital Signal Processor), use Bitstream. As a result, encoded audio information is transmitted with all its functionalities intact.

However, to use your source for playback or a basic stereo setup (2 channels), choose PCM.

On Auto, the audio source will detect the format that the subsequent component can support and auto-select the output mode depending on it.

But to fully understand these output formats, let’s take a deeper look at what they entail.

Bitstream Vs PCM: In a Nutshell

Both PCM and Bitstream are supported on most sources and have no audible differences.

What’s more, the audio information is converted to PCM data at the decoder before processing for playback. This is because PCM is used as the underlying data on most music and surround sound codecs (If DSD is not used).

I keep mentioning “audio decoding”, but what does it mean? For this, we should differentiate between encoding and decoding.

Encoding is the compression of a digital audio file for broadcast or storage on a CD, Blu-ray, media server, and so on. The compression codec can either be lossy or lossless. On the other hand, decoding is the unpacking and transformation of encoded audio information to PCM data.

With this, we can look at what PCM is.

PCM or pulse-code modulation is an algorithm that determines how sound signals are sampled at regular intervals and converted to digital signals.

This algorithm underpins most stereo and surrounds sound formats and is supported by all modern AV gear (Blu-rays, projectors, TV, consoles..).

As you can see from the sine wave below, it is sampled at regular intervals and converted to a series of 1s and 0s (digital bits) for manipulation and storage. This is known as analog to digital conversion (ADC).

On a Blu-ray player/TV/console/TV box, selecting PCM reverses these bits and tries to recreate the analog sine wave (AC signal). The analog signal is then transmitted to the speaker circuitry at the source or to external speakers.

If you are using an audio sink such as a receiver, its internal decoding is bypassed.

With PCM, the audio is downscaled to 2.1 channels (CD quality) over an optical or coaxial connection. This is because the uncompressed surround sound files are too huge and require more bandwidth not offered by optical or coaxial.

However, since HDMI has a higher bandwidth, hi-res multichannel PCM data transmission is supported. This will include support for lossless codecs such as Dolby TrueHD (up to 7.1 channels and Dolby Atmos).

Devices with support for Multichannel PCM may have it labeled as LPCM (linear PCM).

LPCM is a PCM variation where audio samples are taken at regular uniform intervals and quantized on a linear scale (linear quantization) other than using amplitude logs (logarithmic scale).

In linear Quantization, smaller samples are taken at regular intervals which increases bandwidth requirements (uses more storage). Simply put, LPCM (PCM Plus) takes more discrete samples to give a more accurate representation of the sound and is widely used for encoding bitstream.

Thus, devices that support LCPM can handle higher sampling rates (up to 192 kbps/32-bit) and have HDMI sockets.

LPCM is used on 2-ch and surround sound formats such as Dolby Digital (AC3).

This is useful for anyone with a surround sound setup as PCM usually downscales to 2-channel audio. LCPM mode outputs up to 8 uncompressed channels over a high-bandwidth connection such as an HDMI or DisplayPort.

However, using LPCM may introduce an audio delay (lip-sync error) if the format in question is not well implemented on the audio sink (receiver, soundbar…). This is because the audio processing may not be as fast as required.

As a result, audio signals are transmitted unaltered to an audio sink (Receiver, preamp, soundbar…). At the audio sink, the codec is unpacked to reveal the PCM data before amplification and playback.

The compressed audio data is transmitted as a stream of data packets (packets of 0s & 1s) from the source to the subsequent device. During decoding, these packets are unpacked to PCM/LPCM which is further processed by the DSP (Digital Signal Processor).

And since the audio transmitted is compressed, it can be relayed over a wired or wireless connection. This can be using an RF, Optical, coaxial, or HDMI which is preferred.

HDMI supports transmission of both lossy and lossless codecs including Dolby Digital, DTS, Dolby Digital Plus, Dolby TrueHD, DTS-HD, and so on. Optical and coaxial connections will only support lossy codecs such as DTS and Dolby Digital for up to 5.1 channels when using Bitstream.

Thus, to use Bitstream Out, your audio sink should support the specific codec and format (container) used for the audio.

Only a high bandwidth transmission will support a lossless codec when using Bitstream. Dolby Digital and DTS digital are supported by HDMI, Optical, and coaxial connections. However, only an HDMI connection can support more than 6 channels (5.1).

Apart from Dolby Digital Plus, lossy codecs are supported by most audio connections.

Bitstream vs PCM (soundbar and TV)

When using your TV’s internal stereo speakers, decoding occurs within the TV and auto-selects PCM.

However, for a TV with a soundbar, PCM downscales the audio to 2 channels for transmission on a digital connection. Only LPCM will support surround sound codecs using HDMI.

For 2.1 channel soundbars, use PCM and Bitstream for surround sound soundbars.  Only high-end and mid-range soundbars with proper DSP (DAC) implementations and HDMI inputs can decode hi-res surround codecs.

If your soundbar has an HDMI ARC or eARC input, use bitstream. This offloads the audio decoding to the soundbar, and your TV doesn’t do video and audio processing.

Your audio setup will be the primary determinant when selecting between PCM and Bitstream.

For a 2-channel (Stereo) configuration, selection PCM should be fine in most cases. However, for surround sound systems, you are better off Bit-streaming the audio signals from your source to your sound processor.

But in terms of audio quality, there should be no notable difference between these two digital audio output modes.

Choose the output format that works for your specific system.