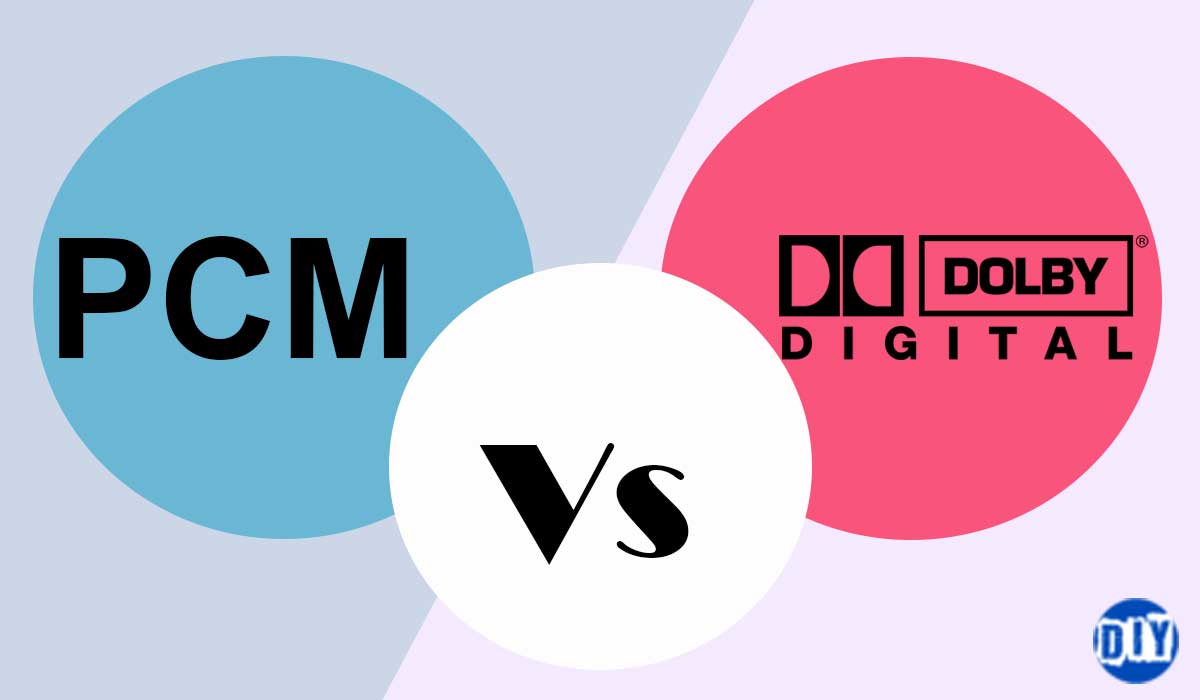 PCM or Pulse Code Modulation is the process by which analog audio signals are represented in digital form for manipulation and storage. Dolby Digital on the other hand is an audio format that compresses PCM tracks to a more compact form for distribution over different media such as Blu-rays and streaming services such as Netflix.

When Dolby Digital bitstreams are decompressed the PCM/LPCM data is derived and fed to a DAC (digital to analog converter) for the processing which gives line-level signals that can be amplified and played back over your speaker system.

It is argued that PCM produces a higher fidelity sound and more robustness.

PCM or pulse code modulation is a system (an algorithm) for representing and digitizing analog audio signals for storage and streaming. The analog audio signals (sound) are sampled at regular intervals and represented as binary values (0s and 1s) for manipulation and storage (analog to digital conversion).

The samples are taken at varying bit-depth ranging from 12 to 24 bits at sampling frequencies between 44.1 kHz to as high as 192 kHz. For instance, a PCM track may be 48kHz/16-bit, 192kHz/24-bit, and so on to show the amount of audio information represented.

PCM audio is used to represent anywhere from a single audio channel to multiple channels for surround sound support.

PCM tracks are usually 2 channel audio but the later iteration known as linear PCM (LPCM) where more samples are taken and uses more storage and bandwidth. LPCM is sometimes referred to as multichannel PCM as it is used to represent multichannel audio for formats such as DTS and Dolby Digital.

PCM underpins other audio formats such as DTS and Dolby Digital. It’s also used on some digital telephone systems and for broadcast.

Most media players and AV gear such as Blu-ray players will support PCM audio but not all media will include the PCM format.

On a Blu-ray player/TV/console/TV box, selecting PCM reverses these bits and tries to recreate the analog sine wave (AC signal) for amplification and playback.

If you are using an audio sink such as a receiver, its internal decoding is bypassed.

With PCM, the audio is downscaled to 2.1 channels (CD quality) over an optical or coaxial connection. Uncompressed surround sound files require a higher bandwidth connection such as HDMI.

However, an optical or HDMI connection can be used to stream LPCM signals (5.1) from a player to an audio sink for unpacking and processing. An optical connection can transmit up to 5.1 audio channels. Any HDMI cable will be used for PCM or LPCM data.

LPCM is a PCM variation where audio samples are taken at regular uniform intervals and quantized on a linear scale (linear quantization) other than using amplitude logs (logarithmic scale).

In linear Quantization, smaller samples are taken at regular intervals which increases bandwidth requirements (uses more storage). Simply put, LPCM (PCM Plus) takes more discrete samples to give a more accurate representation of the sound and is widely used for encoding bitstream.

Thus, devices that support LCPM can handle higher sampling rates (up to 192 kbps/32 bit) and have HDMI sockets.

LPCM is used on 2-ch and surround sound formats such as Dolby Digital (AC3).

This is useful for anyone with a surround sound setup as PCM usually downscales to 2-channel audio. LCPM mode outputs up to 8 uncompressed channels over a high-bandwidth connection such as an HDMI or DisplayPort.

However, using LPCM may introduce an audio delay (lip-sync error) if the format in question is not well implemented on the audio sink (receiver, soundbar…). This is because the audio processing may not be as fast as required.

Dolby Digital (DD) is a lossy digital format compressed using the AC-3 audio coding system developed by Dolby Labs. DD supports anywhere from one to 6 discrete audio channels and is a standard in most multi-channel media such as Blu-ray. All Blu-rays are required to support Dolby Digital.

In simple terms, a lossy compression means that an algorithm is used to remove information that is deemed irrelevant depending on the sounds that our ears are sensitive to. As the studio master is compressed using Dolby Digital some information and fidelity are lost to reduce the bandwidth and storage requirements. This can compromise audio fidelity.

Dolby Digital content is encoded at a constant bitrate to support 5.1 channels of audio at a sampling frequency of 48 kHz with a 16-bit resolution.

Dolby Digital is also used as the core for all Dolby Digital programs. As such any media encoded with another of Dolby’s systems such as Dolby TrueHD will revert to Dolby Digital on legacy devices to ensure compatibility with current and older DD equipment. The Dolby Digital track is carried on a separate stream.

As the compression audio information is unpacked by an AC-3 decoder such as a Blu-ray player or a TV, it outputs digital PCM signals (2-channel) that can be fed to a DAC or receiver using an analog, optical, or HDMI connection that is connected to the player. To output linear PCM 5.1 signals from a gaming console or player, you will need an HDMI interface. When an analog or optical cable is used for LPCM, the output is reduced to PCM (2-channel).

The Dolby Digital bitstreams can also be output using an optical or HDMI connection when the audio output is set to Bitstream.

link to Dolby Atmos Vs DTS-X

Dolby Digital and DTS are the two competing surround sound technologies. DTS content is encoded at a higher bit rate than Dolby Digital for more accurate reproduction. However, Dolby claims to have a...