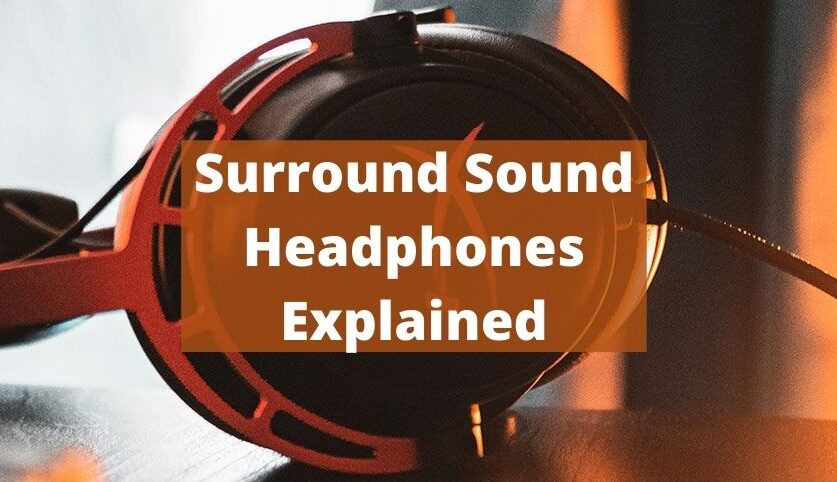 Surround sound systems are for their immersive experience and can be found in movie cinemas, some media rooms, and dedicated home theaters.

However, these systems are expensive and complicated to set up since they use several speakers that need to be placed correctly and calibrated to best suit your room depending on its layout. This is where surround sound headphones come in.

Surround sound headphones are compact, convenient, and cheaper compared to speaker surround sound systems. This is achieved by use virtualization technologies on stereo headphone sets but can also be done using smaller drivers that are packed inside the headphone cups to reproduce the surround sound effect.

These headphones can be used for watching movies, listening to music but are mostly used by gamers that want an immersive gaming experience and a sense of directionality.

So, how do these headphones work, and are they worth in the long run? These are some of the questions I will help you better understand.

Virtual surround sound headphones utilize 2 stereo drivers that are usually between 40mm and 50mm with one driver for each ear.

These drivers are used to mimic a surround sound setup by using psychoacoustics (how people perceive sound) and Head-Related Transfer Function or HRTF techniques to create spatial sound effects.

These techniques take advantage of how sound waves hit our ears and how these sound waves interact with the environment and parts of our body from the shoulders to the curves in our ears to give a sense of direction and space.

On a basic level, these techniques use level, time, and other subtle sound differences to give you an idea of where the sound comes from.

Information from these interactions is used by researchers to create a set of algorithms that are used on sound processors (processing chips) to add delay, volume adjustments (Levels), and other aural cues to mimic a proper surround sound system.

The chip can be found on an onboard DSP in the headphone or a dongle that comes with the headphones package that can be plugged into your audio source be it a laptop or a gaming console.

When these algorithms are applied to a set of stereo headsets, it fools your brain into believing that the sound is coming from several channels instead of two. The illusion created can be similar to that found in a 5.1 or 7.1 system.

But for this to work, testing has to be done on several individuals that are built differently and have different features such as different head shapes, pinna shapes, and size, and so on to create a generic algorithm that will be best suited for most virtual surround headphone users.

However, some algorithms can be altered to suit individuals which are done using photos of your head, shoulders, and ears to render individualized spatial sound but this is not commonly done. An example of a company that does this is Sony with its 360° Reality Audio software.

The reason virtual surround sound works so well on headphones is that they are very close to the ear where the sound is in a more controlled sound field with little interference such as crosstalk interference and you are not limited by your room’s layout or sitting position.

Dolby Atmos is a 3D object-based surround standard that can be used as a software solution that can be purchased for your gaming computer or console.

This standard is used with content that has been encoded in the Dolby Atmos format to create a virtual 3D surround sound experience with stereo headphones.

However, if the sound has not been mastered using this codec, it will create a 5.1 or 7.1 surround sound effect without the height element. This means that the experience will not be 3D since it does not up-mix content that has not been encoded in Dolby Atmos.

Dolby Atmos for headphones can be licensed for $15 but can also come as a free solution if you buy the Dolby headset bundle.

DTS Headphone:X is a Dolby Atmos alternative that is also an object-based surround sound standard for headphones.

This standard can be used with stereo headphones for an immersive experience but will only create a 3D bubble effect if the source has been encoded in DTS-X. If the content is not encoded in DTS, you will only have 5.1 or 7.1 surrounds depending on the content you are playing.

To get DTS-X for headphones, you will need to purchase the software which costs $20, or buy a DTS headset that will come bundled with the software.

Auro 3D is an equivalent to Dolby Atmos and DTS-X and also comes with a virtual solution for headphones.

It also works best with Auro 3D content to create the illusion of sound coming all around you even from above but will also work with content that has not been encoded in Auro 3D for a 5.1 or 7.1 surround effect without the extra height element.

This is a free solution that can be accessed if you are using a Windows computer for gaming and watching movies.

Windows sonic will be supported by some games and content that have been encoded in surround sound formats.

This is a virtual surround sound option brought to you by Creative Labs.

Super X-Fi uses your face and ear profiles to personalize your surround sound experience when you are using your headphones. The photos are taken using an app on your smartphone or tablet.

It can be used as a software solution for stereo headset but can also come with Creative Lab’s virtual headphones that have an onboard DSP that processes your audio to give you an immersive surround sound experience.

This standard is similar to Super X-FI in that it personalizes your experience using your head and ear profiles but only works with Sony headphones.

It is also expensive since it is a monthly subscription service to me would not be ideal. This is not an option I would recommend for you.

THX is another software option that creates a virtual surround sound effect on stereo headphones and also comes with several presets that can be used to enhance your experience further depending on what you are watching or the game you are playing.

These are just some of the popular virtual surround sound option but there are others such as;

I would also recommend getting a headphone DAC/Amp or soundcard that supports either Dolby or DTS surround sound solution and pair them with a great set of stereo headphones that do not have to be from either company.

Dolby and DTS are the two most widely used surround sound solutions and having a sound card or headphone amp that you can connect to either your gaming console, Blu-ray player, streaming box, or computer via a USB connection would be a great solution for many.

Some headphones DACs will also come with a wireless connection option that you can use with wireless headphones or current pair of earbuds such as Air Pods.

7.1 surround headphones boast a total of 10 drivers, 5 drivers for each ear. The drivers include all drivers found in a 5.1 headphone cup but with an extra rear surround channel for each ear.

Most True surround headphones also come with a plug and play adapter where the decoding and equalization are done for a better and more immersive experience overall.

The downside to these headphones is that they tend to be bulky and expensive as it takes a lot of time and money to design, place the drivers, and make them work together perfectly.

The Low-Frequency Effect or LFE channel (the .1 channel)

This is something that most people tend to gloss over when talking about surround sound headphones.

The LFE channel is responsible for the bass effect but does not represent the number of bass drivers in a surround headphone. This is something that most people tend to get wrong.

So, how do surround headphones reproduce the low frequencies yet they do not have subwoofers required to move a lot of air which is crucial for adding depth to audio?

Low frequencies are felt more than they are heard but how can this effect be recreated in something as small and a pair of headphones? The answer lies in how close the headphones are to our ears, the headphone’s design, and our bone structure.

Since headphones are usually so close to our eardrums and ear bone structure, they do not need to move much air or rumble as much to produce bass and add to the depth effect.

Not much sound pressure is lost as would be with a subwoofer since the ears are literally on our ears.

These effects also hit our head bone and ear bone structures to vibrate them. The vibrations are then received by our brains which process the information to produce the same effect that a subwoofer would have on us.

Surround sound headphones will not sound great if they do not have a great bass response. Depth is essential both in a surround sound system and a stereo system.

What to look for in surround sound headphones

Are surround sound headphones worth it?

But many would argue that virtual surround headphones are better and will outperform true surround sound headphones which are also costlier. This is a sentiment I also share but this will also come down to personal preference as is a lot of things tech.

Being immersed in a game or a movie will improve your experience and will also determine if you perceive something as great.

High-quality sound is always better than a high-resolution image but if you can combine the two, you can take your movie watching, gaming, or music listening experience to the next level.