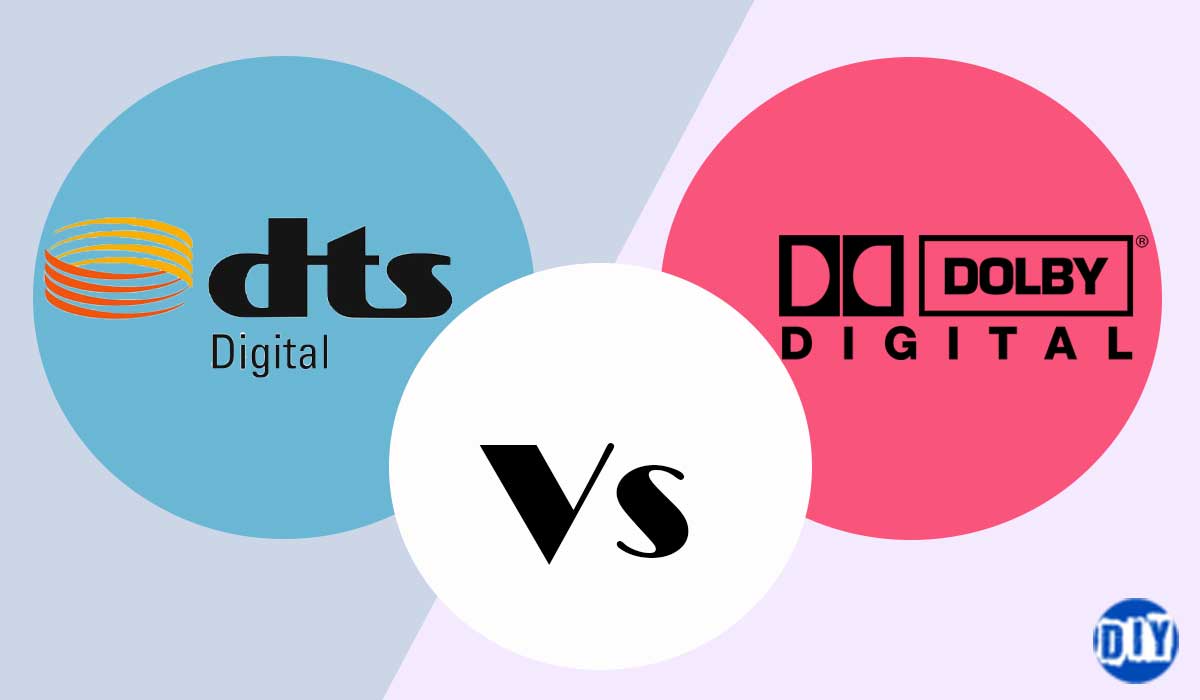 Digital audio can be complicated as there are several audio formats and encoding systems that enhance the sound experience in our homes. However, in this guide, we will be comparing DTS and Dolby Digital, 2 popular audio systems that have been around for more than 2 decades now for cinema and home use, and how they deliver 5.1 surround sound for movies, games, and so on.

DTS and Dolby Digital (AC-3) are lossy/compressed audio systems generically known as ‘5.1’ systems as they both support 6 independent audio channels that include a band-limited LFE channel (the .1 channel) for low-frequency sound enhancement. The LFE channel is given a 10 dB boost compared to the speaker channels.

Both systems are encoded with information our ears are most sensitive to and thus use a fraction of the bandwidth that would be used by PCM or linear PCM (LPCM).

DTS is less compressed compared to DD and is encoded at a higher bit rate of up to 1.5 Mbps and thus uses more bandwidth and storage. Meanwhile, Dolby Digital has a maximum bandwidth of 640 Kbps but is said to have a more efficient encoding system.

Both systems include the codec (algorithm) and are supported as audio formats on most current and legacy A/V devices. This includes gaming consoles, soundbars, Streaming boxes, and platforms such as Netflix and Amazon Prime Video.

Here is a further dive into each audio system.

Dolby digital is a multi-channel 5.1 standard for home theater surround, cinema, and multichannel broadcast. The format relies on the Audio Compression 3 (AC-3) algorithm to encode audio signals. AC-3 employs psychoacoustic algorithms to compress the PCM/LPCM signals by removing parts that are deemed redundant and that our ears are insensitive to.

Dolby Digital tracks are compressed at a compression ratio of as high as 12:1 but 6:1 and 4:1 compression ratios are more common. Compression reduces the size of the audio program for bandwidth-limited operations and less storage requirement without altering the quality of sound output.

Dolby Digital tracks are encoded at a constant bitrate of 640 Kbps on Blu-rays, and 504 Kbps on HD DVDs for 5.1 channel support. This can deliver anywhere from 1 to 6 discrete/independent audio channels. This includes 5 full-bandwidth channels of 3 Hz to 20 kHz and an LFE (low-frequency effects) channel of 3-120 Hz for the sub. The LFE channel uses one-tenth of the bandwidth used by the main speaker channel hence the .1 nomenclature.

During encoding, metadata is added to the Dolby Digital soundtrack. Metadata is additional information created by the audio mixer to give more control over the playback. This information includes;

Any device with an AC-3 decoder can unpack Dolby Digital content to retrieve the PCM/LPCM data for further processing by a DAC as specified by the codec and metadata parameters. This will include devices such as a receiver, a BD/DVD player, a gaming console, a TV, and so on.

The downmixed stereo track can either be Lt/Rt or Lo/Ro. Lt/Rt (total Left/total Right) contains a Center and Surround (CS) channel matrixed into the main left and right (LR) channels. The CS is extracted during decoding, The center channel is reproduced by a center channel speaker while the surround channel is played back by one or two surround speakers for 5.1 channel playback.

Lo/Ro (Left only/Right only) contains audio information for the standard left and right stereo playback over 2 speakers or over headphones. The center channel is downmixed into the left and right channels.

Dolby Digital bitstreams can be transmitted using an optical or HDMI connection.

Later DD iterations include an extension substream to the core for additional channels, resolution, and frequency extension. They include;

Dolby Digital EX (6.1) has an additional rear surround audio channel matrixed into the left and right surround channels in the 5.1 Dolby Digital soundtrack. This extra channel is therefore not a discrete/independent channel.

Any AC-3 decoder can unpack Dolby Digital EX data to produce 6 audio channels. The extra surround channel is played back by one or 2 surround speakers.

On a 5.1 speaker system, a phantom center back surround is created.

Dolby Digital Plus uses the E-AC-3 (Enhanced Audio coding 3) compression system at a maximum bitrate of 6 Mbps for support of up to 16 discrete audio channels. For now, DD+ is limited to 7.1 uncompressed channels on Blu-ray and other digital media but can be used to deliver lossy Dolby Atmos content.

Dolby Digital Plus is an optional format used on streaming services such as Netflix and on Blu-rays.

Dolby Digital + bitstreams require an E-AC-3 decoder to unpack the LPCM data. However, the core Dolby Digital track is played back in its absence. This is because Dolby Digital Plus is built upon the 5.1 AC-3 system for compatibility with current and legacy devices.

For transmission of DD+ bitstreams, an HDMI 1.3 cable connection or higher is required. With an optical connection, the Dolby Digital bitstreams are transmitted instead.

Previously known as DTS encore, DTS Digital Surround is the original DTS encoding and decoding format and is used as the core for any DTS soundtrack. DTS Digital surround tracks are encoded using the Coherent acoustic (CA) compression algorithm.

Like Dolby Digital, It supports up to 6 discrete/independent audio channels at a sampling frequency of up to 48 kHz and a bit-depth of 24 bits for home use. 5 channels are reserved for the main speakers while the one channel is reserved for the LFE channel.

But unlike Dolby Digital, DTS supports higher bit rates and is less compressed. DTS content can be encoded at as high as 1.5 Mbps on Blu-rays. And as higher bitrates codecs require fewer calculations for encoding and decoding, DTS is less CPU intensive for the production of higher fidelity audio with more dynamic range. It also offers fairly low latency real-time encoding making DTS suitable for real-time applications such as gaming.

DTS digital sound is mandatory on Blu-rays. This audio format can be decoded by most current and legacy audio/visual gear such as a gaming console to output LPCM data to a DAC for processing.

On a smaller speaker configuration, the DTS data is downmixed to stereo or mono.

To transmit 5.1 DTS digital bitstreams, you will require an optical or HDMI connection. Only an HDMI connection will support the transmission of decoded LPCM data.

The lossy DTS digital surround core can be expanded with the addition of matrixed and discrete channels and higher sampling rates. The core substream can be decoded independently for 5.1 channel playback but some decoders can decode the 5.1 substreams followed by the extension substream that includes lossless audio signals. The decoder then combines the reconstructed lossy core and lossless extension components before output.

DTS ES (Digital Theater Sound Extended Surround) is a 6.1 format that uses as an additional rear channel (rear central) added to the DTS digital core. It enables the encoding of LPCM audio signals at up to 24 bits per sample at a sampling rate of up to 96 kHz. It also uses less compression than Dolby Digital EX.

DTS ES creates a total of 6.1 channels from a 5.1 source encoded with DTS-ES. The encoder adds a matrixed surround back channel to the 5.1 core that can be played back by one or 2 rear surround speakers.

There are 2 DTS ES variants namely;

The extension data is ignored by the 1st generation DTS decoder but can be decoded by 2nd generation decoders.

DTS 96/24 is an upscaled version of the standard DTS digital system and is split into the core + extension. The core is encoded at 16/48 or 24/48 depending on the source while the extension is encoded at 96 kHz at 24 bits. The extension data includes information about the differences between 96 kHz and 48 kHz and the bit differences.

The information about the higher sample rates is not carried in the core but as an extension to the core stream. The extension is thus a substream.

At the decoder, the extension data is interpolated/inserted into the core data to increase its fidelity. It produces a 24-bit 96 kHz Bitstream when the reconstructed extension data and the core signals are combined.

It supports up to 5.1 channels of audio at a sampling frequency of 96 kHz instead of the standard 48 kHz and at a resolution of 24 bits for more dynamic range. In a DTS 96/24 decoder, the core + extension data are recombined and decoded resulting in a lossy stream. A lossy stream will not be a bit to bit-perfect with the LPCM data it was pulled from as it is still limited to the 1.5 Mbps bitrate out of which 384 kbps is reserved for the 96/24 extension.

It is fully compatible with DTS digital systems in the absence of a DTS 96/24 decoder.

In a capable 96 kHz decoder, the core + extension are unpacked into core and extension data.

In the 96 kHz decoder, the unpacker first separates the core + extension stream into the core and extension data. The core subband decoder, in the Reconstruct Core Audio Components block, processes the core data and produces the reconstructed core subband samples

When a 48 kHz-only (legacy) decoder is fed the core + extension bitstream the extension data fields are ignored and only the core data is decoded. This results in 48 kHz core LPCM audio output.

With DTS 96/24, you get a higher quality audio playback but it is still lossy as the extension uses the same compression algorithm.

This format is mainly used for encoding and storing multi-channel high-definition music that can also be played back on a stereo configuration.

DTS proponents claim it can deliver superior audio quality compared to Dolby Digital systems due to the use of less compression and higher bitrate. However, these 2 cannot be used to determine which surround sound system is better and does not also equate to higher sound quality and this will come down to your hearing perception and your audio system.

This is because both systems used very effective coding systems and compression schemes and no technical or scientific means can be used to determine which will sound better as both systems are based on different technologies.

Despite this, there are times when DTS digital soundtrack may sound better than a competing Dolby Digital version.

The audio system you adopt depends on personal preference and what sounds best to you by ear. It is all subjective.

Do you have a preference, what are your reasons for your choice? Let us know down below.