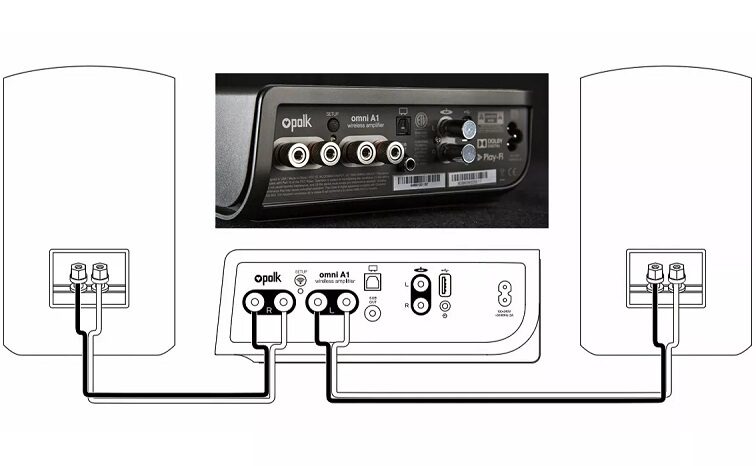 There are several reasons why one may want to turn regular wired speakers into wireless speakers. The most common reason is convenience by reducing the number of wires in your home theater/media room.

However, this does not mean getting rid of all wires as the speakers still need to be connected to the power source, and so on.

With that said, you don’t have to replace your current speaker system set to go wireless which can be expensive for the most part.

One of the most common methods of making regular wired speakers wireless is by using wireless speaker kits that come with a transmitter and a receiver. These kits send audio signals using radio signals similar to those used in Wi-Fi transmissions.

These are the two common methods used to make speakers wireless but before we get into the details of each, let us briefly look at how wireless speakers work.

The term “wireless speakers” is often misunderstood by many to mean that that they are no wires at all.

However, this is farther from the truth as these speakers also need a wired power connection unless they have built-in batteries which are not powerful enough to run home theater speakers.

Even some of the portable wireless speakers with built-in batteries come with auxiliary cables for source connections. It simply gives you the option of choosing between the two.

Most wireless home theater speakers need more power to drive them and come with powerful built-in amplifiers and a means for wireless transmission from your audio source such as Wi-Fi.

These speakers also come with a power cord to connect to your outlet meaning that they are not fully wireless.

The power outlets, therefore, need to be close to the speakers for this to work conveniently and for a surround sound system, you may need several outlets strategically positioned for the speakers.

How is the audio signal transmitted wirelessly?

Most wireless home theater and media room speakers use Wi-Fi to transmit audio signals from the source whether it is your receiver, preamp, or any other sound processor.

Wi-Fi transmits audio using radio waves whose amplitude can be modified (modulated) for great wireless transmissions. The receiver then converts the radio waves to line-level electrical signals to be amplified.

Bluetooth is also used for wireless speakers but is not as much as Wi-Fi. This is because Wi-Fi can transmit at a higher bandwidth and hence can convey more audio signal information at higher bit rates. However, this has changed over the years as Bluetooth technology has become better to take Wi-Fi head-on.

Recent upgrades in Bluetooth technology such as Bluetooth 5 and aptX have been able to reduce the bit rate without reducing audio quality for quicker transmissions.

Now that you have a rough idea of how wireless speakers work, let us look at some of the ways that you can use to convert your set of wired speakers and make them wireless.

If you have a surround sound system, you do not have to make all your speakers wireless. I would recommend only connecting your rear and surround speakers wirelessly, and leaving the front speakers connected to your receiver or amplifier using speaker wires.

But whichever way you decide to take, you will need a way to send and receive the audio signals and a way to amplifier the speakers.

This where RF wireless speaker kits come in.

Some of these receivers may come with inbuilt amplifiers but these amps may not provide enough power compared to the power drawn by most home theater speakers at high listening levels. Most of these amps provide between 20 and 30 watts of power which is enough for listening to a moderate SPL (sound pressure level) but not for loud levels.

I would recommend getting a mini amplifier to power your passive speakers which can then be connected to the power source and used to amplify the audio signals.

As we mentioned earlier, the transmitter uses radio waves similar to those used for Wi-Fi signals. These radio waves have frequencies of about 2.4GHz or 5.8GHz. Ensure that your transmitter’s frequency does not match with your Wi-Fi frequency to prevent radio interference.

So, here is how to set everything up.

As I recommended above it would be better if you bought a kit that does not have an amplifier.

Another thing to look at is the connection ports on the transmitter for the audio signals and the output ports on your preamp, processor, receiver, or any other source. Most transmitters come with 3.5 analog inputs or RCA inputs but some may also come with optical input or speaker wire connectors.

Depending on the audio output port selection on your source, get a transmitter to match at least one of the outputs. You can also use an adapter between your source and the transmitter.

If you decide to get a mini amp to connect with the receiver on the kit, ensure that you match the impedance on the amp with that of your speakers. However, this should not be a problem if your speakers are powered/active.

All these come down to personal preference and your budget.

You also need to keep in mind that the bigger your surround setup is, the more you will have to spend. Different kits can range from affordable to expensive depending on the quality and if they have built-in amplifiers or not.

Note: These kits do not really make your system “wireless” but rather reduce the length and number of wires that you need to use. This is because they come with wires for the speakers, power source, and audio source connection.

2.      Connect the transmitter to the audio and power source

You will need to connect the RF transmitter to your audio source using the available cables and depending on your port selection.

A 3.5 aux connection is also pretty straightforward as you will only need to connect the audio output port to the aux input on the transmitter. Also, in this case, you can use an adapter if any of the two devices do not have an aux port.

Speaker wire connection between a receiver/pre/pro is also easy as you will need to connect the output to the input on the receiver making sure that you match the polarity (+tive to +tive and -tive to -tive).

Make sure that the speaker wires running to the respective channels that you want to make wireless are disconnected from your speakers.

You will then need to connect the power cord on the transmitter to an outlet.

The first scenario I am going to look at is an RF receiver with a built-in amplifier. This is a simple connection as you need to connect the receiver to the speakers making sure you match the polarity.

The receiver can then be connected to the power outlet. There should be a flashing light to let you know if the receiver is getting power.

The second scenario would be a receiver with no built-in amp. If your speakers are active, connect the receiver to the speaker and plug in the power cord to your outlet.

However, if you are using a separate amp for passive speakers, use a speaker wire to connect your speaker and the amp. The amp will then need to be plugged into the power source and use an RCA cable to connect the receiver to the amp.

Most small amplifiers will be 2-channel amplifiers meaning that each amp can power 2 speakers. This also means that you can use one RF receiver and one amp for 2 speakers, most probably the rear speakers.

Once you are done with all your connections for the various speakers you want to make wireless, power on the whole system.

The transmitter should be able to send audio signals to the receiver.

Play an audio track and ensure that each speaker is reproducing sound. Each wireless receiver should also have a blinking light to let you know that the wireless transmission is going right.

Even if each speaker is reproducing a clear and high-quality sound, you may need to calibrate your system to adjust the levels for each channel.

What about a wireless Sub-woofer?

The process of making subwoofer wireless will be the same as with other speakers but in this case, the transmitter should have a sub-in input or an LFE input. If you have a powered sub, you will only need a receiver for the sub but if the subwoofer is passive, you will need an amp with an LFE output that can power the subwoofer.

The principle of converting regular speakers and making them wireless using Bluetooth is the same as the RF wireless kit case. You will need a BT transmitter and a BT mini amp receiver for the speakers.

However, a transmitter may not be necessary if your receiver, preamp, or most of your sources are Bluetooth enabled.

You also need to pay attention to the Bluetooth technology and I would recommend using devices that have the latest aptX and Bluetooth 5.0 technologies as they offer a better range with better bandwidth at faster speeds.

It is also important to keep in mind that most Bluetooth devices will be limited to one-to-one connections unless you get your hands on something like a Bluetooth hub that can connect up to 22 devices.

But like in the case of the wireless kit, you may only need to make your rear or surround speakers Bluetooth enabled if you have a surround system. If you only have a stereo 2.1 system, making the system wireless should be fairly easy using a mini 2-channel Bluetooth enabled amplifier.

With that said, I would not recommend Bluetooth over the wireless kit since it does not offer as much flexibility mainly due to the limitation on how many devices you can connect at a time and that most Bluetooth receivers are made for direct connections to the source.

When considering whether to make regular speakers wireless, keep in mind that your system will not be fully wireless but depending on your room’s layout, a wireless speaker kit can be a great option.

Home theater speakers are an investment and are meant to last years. Keep this in mind with every purchase.