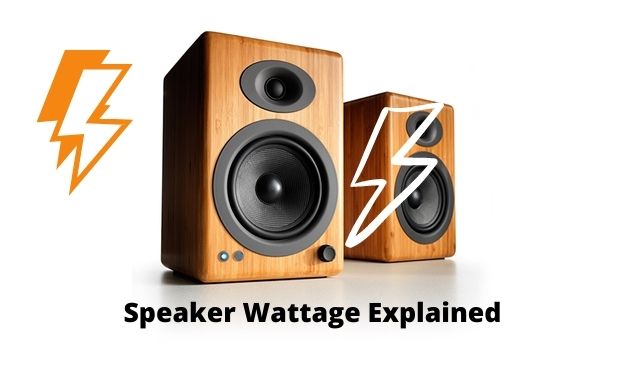 Some speaker specs can be confusing and this is especially true for power ratings (wattage) that are often misleading to the average tech consumer.

This is because some manufacturers inflate their speakers’ power ratings with the hopes that consumers will make their buying decisions mostly based on wattage. Different manufacturers also have different methods of testing speakers.

But what is speaker wattage and how much is enough? Well, let’s break this down.

Speaker wattage is a specification used to express the amount of electrical power a speaker can draw from an amplifier. Wattage is denoted in watts or “W” and can be RMS or Peak power.

But we first let’s look at some concepts to better understand speaker wattage.

A decibel (dB) or a 10th of a Bel is a unit used to show the relationship between electrical power and acoustic energy on a logarithmic scale.

In the case of speakers and sound, it is used to express the sound pressure level (SPL) which directly affects perceived loudness. This can be as low as 0 dB (near total silence) to as high as 130 dB (threshold of pain).

But here is what matters;

Also, the difference between 200W and 1000W is just above 6dB which is not even double the perceived loudness. To double the loudness from 200W, you need about 10dB or 10 times the power which is 2000W.

2000 watts is more power than a heater can handle and no speaker driver can handle this kind of power without damage. A speaker would not be able to handle 1000 watts leave alone 2000 watts before it goes “Puff”. More on this later on.

Understanding dB levels are important in determining how much power speakers can handle.

The table below is a breakdown of just how loud different dB levels are;

Speaker drivers are highly inefficient mechanical devices that convert most of the drawn electrical power to heat energy other than acoustic energy.

All this heat has to be dissipated from the driver somehow (usually through convection from the cone movement and conduction through the driver structure). If this doesn’t happen, the heat will accumulate and things could get bad real fast (blown speaker). More on the effects of heat later on.

But don’t confuse speaker efficiency for speaker sensitivity although the two are related. Speaker sensitivity is a measure of how well a driver can convert wattage to acoustic energy and is denoted in dB/W/M. Efficiency on the other hand is measured as a percentage.

For the highly efficient speaker above (5% efficiency), the sensitivity will be about 99dB for 1 watt at a distance of 1 meter. We get this using the formula below;

However, not many speakers, especially home theater or hi-fi speakers, are these efficient. Also, the sensitivity rating can be in dB/2.83v/M.

But power is a product voltage (V) squared divided by the resistance to current flow in the driver circuit (impedance, Z, in this case) hence;

Not many speaker drivers are that efficient. A 1% efficiency (92dB/W/M) should be enough for most home users. Meanwhile, an efficiency of around 0.2% (85dB/W/M) is pretty low even for a home setting. Keep these two examples in mind, they are going to be important.

Now for what you are here for….

This is where the concepts we have looked at the start to add up and where you begin to see why a 1000-watt speaker doesn’t make sense.

Let’s say you are sitting 4 meters away from your speaker and if you can remember from earlier, we lose about 6dB of acoustic pressure every time we double the distance (can vary depending on other factors such as points of reflection, room loss, dispersion et al).

At 4 meters from the speaker, you lose about 12dB give or take. This means that you will now get 80dB from speaker A and 73dB from speaker B in that listening position with one watt of power.

To get to 92dB at this position for both speakers, speaker A needs to draw 16 watts from the amplifier while speaker B needs to draw just under 100 watts for the same SPL. But this isn’t exactly accurate when taking thermal compression into account.

What is thermal compression?

Thermal compression is a phenomenon where speaker drivers become less efficient as heat builds up in the voice coil. This is because as the voice coil gets hotter, the nominal impedance (Z) increases lowering the amount of power delivered to the speakers.

All speakers suffer from thermal compression no matter how efficient they are.

Now back to our two examples. Speaker A which is 1% efficient, about 15.84 watts will be converted to heat (at 4 meters for 92 decibels) while speaker B which is 0.2% efficient will convert about 99.8 watts to heat for the same with all factors being constant (spoilers: they don’t remain constant).

This means that speaker B will get pretty hot for the same listening level and the temperature will increase with time.

Most voice coils are made of copper and adhesives that can withstand maximum temperatures of around 200°. Most manufacturers take this into account when designing their drivers for better heat dissipation.

Assuming both speaker drivers are 8 Ohm drivers and are made of copper windings (for the voice coil) with a DC resistance (DCR) of about 6 Ohms at 20°, we can calculate how much power is delivered to each driver after a certain period using the formula below.

Where α is the thermal coefficient, T1 is the initial temperature, T2 is the final temperature and R is the resistance.

So, to get the maximum temperature, the DCR for both voice coils will increase to 9.7 Ohms which will also increase the nominal impedance (Z) and we can calculate Z using the formula below;

This means that by the time we get to 200° the impedance will have increased from 8 Ohms to 12.85 Ohms which will effectively reduce power delivery to the speaker driver. The sensitivity of drivers is also reduced.

Assuming we deliver 40 volts continuously on average to a driver at 8 Ohms, it takes a couple of seconds for the driver to reach maximum temperature. Using P=V2/Z, we see that we should expect about 200 watts delivered to the driver, but this does not happen because the impedance increases to 12.85 Ohms.

The power delivered thus drops to;

But is important to remember that speaker B will reach the maximum temperature much quicker than speaker A to reach a certain sound pressure level since it is less efficient.

The efficiency is then reduced further as heat builds up since the impedance increases which means that more power is needed by the less efficient speaker to reach the same level as the more effective driver which increases the nominal impedance even further and this continues until its limits are and you eventually end up with a blown speaker.

But thermal compression also helps protect the drivers to a certain degree because as the impedance increases, less power is delivered and the temperature rise is slowed.

There is no reason to believe that any speaker would be able to handle or raw 500 watts leave alone 1000 watts for sustained periods. The speakers will blow long before you can get to 1000 watts.

It is also important to remember that soundtracks are complex with major peaks and dips at different frequencies. Usually, the peak to the average ratio for most soundtracks is around 10dB.

The peak to average ratio is the ratio between maximum power and the average power of the signal.

Using our examples and assuming that our average level is around 92dB, we established that speaker A needs 16 watts to reach that level, 10 times the power (160 watts) is required to handle the instantaneous peaks. Meanwhile, speaker B will need 1000 watts for the peaks at the same level.

You don’t need quantum physics to know which speaker will get smoked.

Continuous power handling is more reliable when comparing different speakers before making a purchase but it should also not be confused with RMS.

RMS (Root Mean Square) power is usually 0.707 times the continuous power, as you will see by visiting the linked article.

Apart from thermal limits, speaker drivers also have mechanical limits that determine how much wattage they can handle.

You need to consider all these things when looking at how much power the speaker can handle.

How many watts do speakers need?

As you can see from above, there are many things to consider when choosing a speaker other than wattage, most of which are beyond the scope of this article.

But in this case, you have a better chance of getting your money’s worth if you choose a more efficient speaker other than choosing one that can handle more watts.

You can get to a reasonable listening level by using a more efficient speaker with fewer watts. More watts do not mean louder but also louder does not mean better sound quality. With a more efficient speaker, you will be able to reach a pretty reasonable volume with just a few watts but you should also be careful not to crank up the volume knob too high (remember, thermal compression).

Also, because most sensitivity ratings nowadays are in 2.8 volts other than 1 watt per meter, ensure that these 2.83 volts are on an 8-ohm load. These are details that you cannot afford to ignore as sensitivity is heavily reliant on the load (the speaker’s nominal impedance, Z).

It is also important to remember that speaker drivers do not produce their power and rely on power amplifiers to feed them with the power they need.

Do not get deceived by highly inflated power ratings that can be super deceptive. Peace!