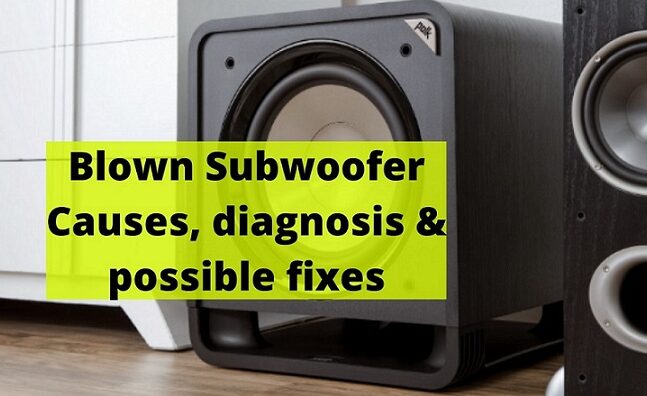 Subwoofers are great for adding “Oomph” to a sound system but are also known to blow when overpowered. Though rare, it happens.

So, what is a blown sub?

A blown subwoofer is one that has undergone a mechanical or thermal failure. This is excluding accidental physical damage such as dropping the subwoofer or poking the sub’s cone using a sharp object.

But how can you tell if your sub is blown and can it be fixed? Well, let’s explore.

Causes of a blown sub-woofer

Overpowering is the most common cause for blown subs.

Subwoofers have power ratings and that can be the peak power, continuous power handling, or RMS.

Usually, your sub driver should only draw just enough power to play the sub-bass frequencies. This should be below the RMS rating. Exceeding the recommended power levels could easily render it unusable.

This is because most sub-woofers have an efficiency of around 1% meaning that only 1% of the power drawn is converted to audible sound while the rest is converted to heat. What’s more, the efficiency of the sub driver drops as heat builds up (learn more about speaker wattage, efficiency, and heat by clicking the link).

So, if you drive your subwoofer at 80 watts, only 0.8 watts are used to move the driver while 79.2 watts are converted into heat. This heat is then dissipated through convection as the driver moves air and through radiation.

When too much power is sent to the driver, more heat is generated than the sub is equipped to dissipate. Thus, the heat builds up in the voice coil.

Overheating the voice coil will, in turn, soften the glue/adhesive holding the coil to the former, deforming it and as more heat builds up, complete damage occurs.

A deformed voice coil will not work as it was intended and may scrap on the sides of the voice coil gap. You may hear rattling, scratching, buzzing, or other unpleasant noises as the driver moves back and forth.

Additionally, a damaged coil will stop working altogether and you will have no sound playback.

It’s not the clipped/distorted signals from an amp that can damage a subwoofer but the excessive power from these clipped signals.

This is something that most people often get wrong.

The problem with clipped signals is the significant increase in the amount of power they deliver to the subwoofer’s drivers.

Distorted signals may not have as much punch as most people prefer and to compensate, they increase the level. In turn, more power is delivered to the sub with no improvement in sound quality.

And as we have seen in the first point, more power is equal to more heat, increasing the likelihood of damage.

Clipped signals do not cause mechanical or thermal damage but overpowering the drivers beyond their power handling capacities does.

Over excursion of the sub’s cone can cause failure but this is less common.

Most speaker drivers are made to withstand over-excursion from their rest area without sustaining significant damage (Xdamage).

But in some cases, the cones surround (cone’s frame) and the spider (a flexible ring that supports the cone) may be stretched limit. When this happens, the suspension may tear, or in worse case scenarios, the voice coil may be pulled out of the voice coil gap (less common).

If the voice coil moves out of place, it overheats from the incoming power as it no longer rests in the magnetic field and does not move as intended. Therefore, the power is converted into heat instead of moving the cone.

However, if only the cone structure, especially the foam, tears or comes loose, fixing the sub should be possible using flexible silicon rubber gel.

Mechanical failure of the magnet assembly can occur if the glue and bolts that hold the front and back plates come loose. The voice coil can get jammed in the voice coil gap which is made to precisely fit the coil.

Failure can also occur if an object gets into the voice coil gap. These can be soil particles, a small piece of metal, a breakaway particle from the magnet, or any other foreign object.

These objects can short the voice coil, melt, and stick on the coil or cause abrasion to the surface insulation of the winding wire. This will cause significant damage to the sub driver.

There is a flexible wire that connects the positive and negative leads on the sub to the respective terminals on the voice coil.

These wires can fail/break and stop the flow of current to the coil.

If this is the reason your subwoofer is blown, soldering another feed wire to the respective terminals should easily solve the problem but it’s not always a possible undertaking.

How to tell if your subwoofer is blown

It may not always be obvious if your subwoofer is blown unless it is mutilated. However, there are several ways to diagnose this and tell which part is damaged.

1.      Listen for distorted bass, scratching, buzzing, and other noises

Playing a soundtrack on your source with your subwoofer connected to the system is one way you can diagnose a blown subwoofer.

If the bass is weak and distorts with an increase in volume, you may have a blown sub in your hands. The same case applies to hearing buzzing or scratching noises that can be a sign of voice coil damage.

This will involve checking if the suspension or cone is torn. The attachment between the surround and the cone can also come loose.

You can also use your hands to gently press on the sub’s cone. The cone should move back with ease and get back into its resting position once you let go.

If the cone wobbles/dances around, the spider may be loose. Lack of movement may indicate a jammed voice coil. The voice coil may be stuck in the magnetic gap or may have moved out of place.

If you hear scratching noise on pressing the cone, then the sub’s voice coil is distorted due to thermal damage.

You can also visually inspect the voice coil by opening up your subwoofer and carefully taking the driver out of its enclosure. The coil may be discolored partially or entirely, it may look burned and the coiled wire may be hanging loose. All these are telling signs of a blown coil.

3.      Use a multimeter to test driver circuit resitance

Connect the positive probe on the sub’s positive terminal and negative to the negative terminal and check the reading on your ohmmeter (multimeter). Ensure the meter is well calibrated and set on a lower range for this test (0-100Ω/X1 range) to prevent inaccuracies.

If you get a 1-ohm reading, the voice coil is still functional. A reading of 0 ohms is bad news as it shows that there is a short and the coil is completely blown (electrical failure).

You can also take a step further to ensure that it is not the flexible wire connecting the terminals on the coil to the leads that are the root of the problem.

For this, the multimeter probes should touch the respective terminals on the voice coil itself. If you get a reading or 1 ohm but had a 0-ohm reading before, then the flexible wire is the problem. It may need to be replaced if possible.

Can you fix a blown subwoofer?

This will depend on the extent of damage and the damaged component.

If the damage is only mechanical such as a tear on the cone or the surround, you can fix it before it gets worse using flexible glue.

A damaged voice coil or failed spider will mean a full reconning process. You will need to buy a whole cone kit, including the coil, cone, surround, flexible lead wires, the gasket, the dust cap, and adhesives. Reconning kit can sometimes cost as much as the subwoofer itself.

It also goes without saying that the processing of installing a new cone is delicate and should be done by an expert who charges for the service, not including other costs such as shipping. This is because foreign objects may get into the magnetic gap in the process if you are not careful enough.

It is also easy to damage the cone kit while installing it.

If the damage has only occurred on the magnet assembly to a small extent and it is still intact, repair may be possible. This will involve taking the magnetic components apart, demagnetization and re-magnetization. It’s a complex process that a few repair experts will attempt.

The thing with blown subwoofers is that you are better off replacing the whole thing with one that is more power-efficient, has a better quality build, and is better at dissipating heat.

When replacing a blown sub, choose one with better power handling, cabinet construction, a more linear driver, and one that is best suited for your listening or theater room. The sub should also have a limiter to reduce the risk of the voice coil heating up and distortion.

Meanwhile, use your volume knob reasonably and don’t overdrive sub. This will apply to both passive and active subs. Do not exceed your sub’s power handling limit.

Blowing a subwoofer is not easy but is not impossible and, therefore, it’s essential to take great care of it.