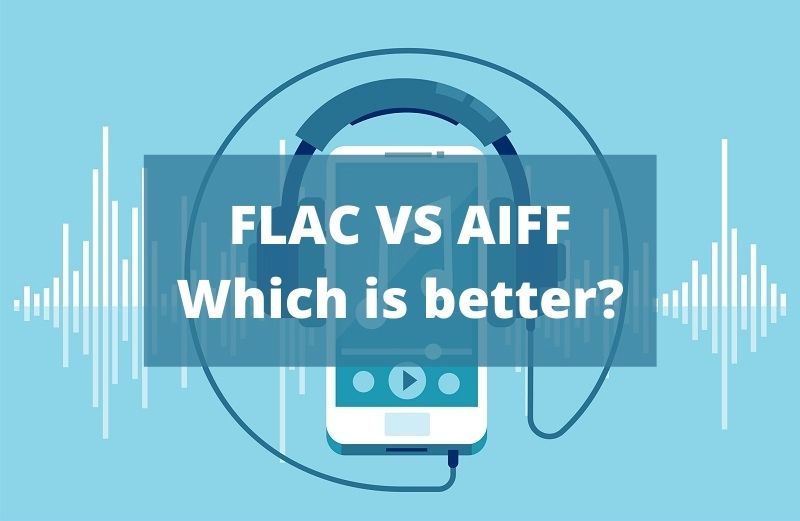 Both FLAC (Free Lossless Audio Codec) and AIFF (Audio Interchange File Format) are lossless audio formats that can be used to store and distribute audio files.

However, if you are an audio nut or audiophile, you may be wondering, which format is the most suited for my music needs? So, here is a comprehensive comparison guide to help you choose between AIFF and FLAC.

FLAC is an acronym standing for “Free Lossless Audio Codec” first developed in 2001 by Xiph.Org Foundation. It is an open-source audio compression format that compresses the original files bit by bit using Pulse Code Modulation or PCM with no quality loss hence the name ‘lossless.’ The original audio files are compressed to about 60% of their original size.

FLAC compression works similarly to ZIP compression but is only used for compressing music files bit by bit. No data is lost during the compression process.

Being an open-source codec means that it is freely available for public use without infringing on the patent. However, you can copy-protect your FLAC audio files using another container format.

How to play FLAC files

You can play FLAC music files in your stereo system, your car, through your headphone, or any other music system just like you would with other popular music formats. However, you will need a player capable of opening the files.

The most popular way to play FLAC files on smartphones, PCs, and Macs is using VLC which is free software that you can readily download from reputable internet sources.

Other players such as Windows Music Player and iTunes may require you to install a plugin to decode the audio files.

However, most media players will be compatible with FLAC. These media players include JetAudio app for android phones, Clementine for Mac OS, Media Connect for iPhones, Roon, and others.

However, unlike FLAC, AIFF files are uncompressed and use more storage (about 70% more storage).

You will require more space to store AIFF files which are 10 Megabytes for every minute of the music file. This means that for a minute file, you will require about 100 MBS of storage.

AIFF files are sampled at a rate of 44.1 kHz which is 44100 cycles per second and with a bit depth of 16 bits using Pulse Code Modulation (PCM) similar to WAV (Waveform Audio Format) files that are stored on CDs. That is why AIFF is also known as the Apple version of WAV.

However, there is a compressed AIFF version known as AIFC or AIFF-C that was also developed by Apple. This compressed version compresses the audio files by 6 times their original size.

How to open AIFF files

With the right software converter, you can convert AIFF audio files to FLAC files to use less storage and vice versa.

One such software is MAX which can be used to not only convert these files but can also rip your audio files. Other conversion software that you can use is iDealshare VideoGo, Faasoft, Footbar 2000, dBpoweramp, JRMC, HD Video Converter, and many more.

You also have the option of using online converters. However, some converters are slower than others.

Both FLAC and AIFF and great and lossless audio formats that can be used to store and play music in your sound system.

The biggest difference between these formats is that one is compressed and the other is uncompressed hence requiring about 50% less storage.

With both FLAC and AIFF no bits are lost as all information is copied bit by bit. You can also convert one format to the other and the audio file will remain the same. However, if you are more concerned about storage, you should convert your files to FLAC.

You are also better off with FLAC since most media players outside the Apple ecosystem can natively support it. But if you are an avid Apple user, AIFF will be natively supported by your player.

It all comes down to personal preference, the device you use, your favorite media player, and most importantly storage limits.