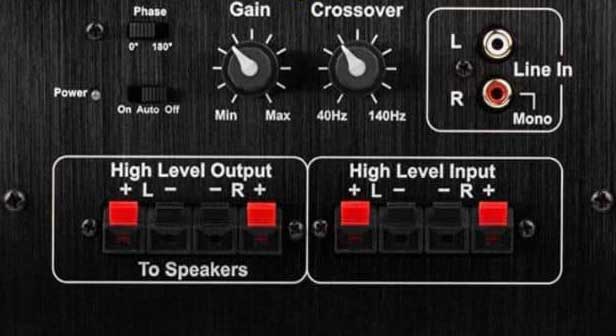 Although it seems complex at first, setting your subwoofer’s gain, crossover, and phase should be fairly easy.

For a deeper understanding of the subject matter, let’s look at how to set each parameter in this step-by-step guide.

Before setting your subwoofer, here are some terms you will find useful as you skim through this guide;

Note: The Passband is the band of frequencies that pass through a filter. It’s usually one octave from the crossover point. The stopband is a frequency band below which signals are filtered out or significantly attenuated.

The subwoofer gain knob or high/low-level control adjusts the amplitude of the sub’s input signals. It increases or decreases the bass output level about the input.

Setting the gain should match the subwoofer’s level to the main speakers’ volume level to better integrate them. You can also adjust the sub-level depending on preference and playback material.

Set the gain too high and the bass signals fall at risk of clipping. Meanwhile, setting gain too low, limits the dynamic range and may result in an audible hum and hiss as the noise floor is touched.

What’s more, there is an inverse relationship between gain and crossover. Increasing the gain moves the crossover point forwards and vice versa making the audio boomier. Lowering the crossover or gain will rebalance the system for a smoother response.

How to set subwoofer gain

When setting the gain, use well-placed front speakers and the sub to ease the process. On your AVR, properly set the distance between the speakers and the MLP for time alignment as the output level varies with distance.

Set your speakers to “small” and the crossover at 80 Hz for later adjustment. Then bypass your sub’s internal crossover circuit using a bypass switch or by maxing the crossover frequency.

As time goes by, adjust the trim level to find the bass level that best works for you. The output level for all speakers can then be adjusted using the AVR’s master volume control.

Trim is inversely proportional to gain. As such, increasing the gain will result in a lower trim level and vice versa at the reference level. Don’t set the trim level higher than 0 as this may clip the bass signals.

Setting the gain level by ear will require you to play a well-balanced track. Set the trim level to around -6 and the MV to 0.0. Then adjust the gain until it’s too hot before turning it down to an acceptable level where the sub balances with the main speakers.

Since both subwoofer gain and volume controls affect the absolute volume level (dB SPL), they are often used interchangeably.

The subwoofer crossover frequency is the frequency where the main speakers roll off for the sub to take over the Low-Frequency sounds (Bass and sub-bass). It’s a point 3 to 6 dB lower than the passband before the response steeply falls into the stopband depending on the slope.

Once set, bass from the speaker channels below the crossover is extracted and combined with the dedicated LFE channel (up to 120 Hz) to a mono output and routed to one or more subs.

Usually, this happens on a low-pass filter. A low pass filter is not an ON/OFF switch. Instead, it gently fades over an octave or two for a seamless transition.

In mathematical terms, an octave is the doubling or halving of frequencies. If the crossover frequency is 3dB down at 80 Hz, an octave higher or lower will be 160 Hz and 40 Hz respectively. Thus, the sub still outputs some localizable sound at 160 Hz or higher.

The main speakers and sub’s output should then acoustically blend (acoustic summation) to deliver a near-flat response similar to the original audio signal.

When the crossover frequency is set, the sub shouldn’t be easily localizable.

If the crossover is set too high or if the crossover slope is too gentle, the sub output’s some directional audio making it easier to localize. Localization also occurs on a ported sub that is chuffing at higher frequencies due to port tuning errors.

The speakers and subwoofer should have the right amount of overlap. If the overlap is too large, the sound output will be disjointed while too little overlap makes the bass output overbearing (boomy), mudding the response.

How to set the crossover frequency

Depending on your setup, the crossover can be set on the AVRs or subwoofer’s filter.

However, the receiver’s filter is preferred. As such, the sub’s crossover circuit is bypassed using a switch or setting the sub’s LPF to max (~150 Hz). This prevents cascading crossovers that can lower the bass output quality.

To use the sub’s low pass filter, use its stereo line-level RCA or speaker-level inputs from the receiver’s respective outputs. This bypasses the AVR’s/pre’s crossover.

Set the crossover frequency between 30Hz and 120 Hz depending on the speakers’ capabilities for a smooth response. An 80 Hz crossover is preferred as frequencies below 100 Hz are less directional. With more capable main speakers, the crossover can be set lower to 60 Hz or so and higher at 100 Hz or so for less capable speakers.

At low frequencies, soundwaves travel from the source uniformly in all directions but becomes more directional at higher frequencies.

Choose the crossover frequency that nets you the best overall response.

Key points for setting the crossover;

Some audio sinks use electronic DSP crossover circuits with slope adjustments. Slope control changes the rate of signal attenuation. It’s recommended to use a 3rd order (18dB/octave) or 4th order (24 dB/octave) slope. An 18dB/octave slope is gentler (less steep). The higher the decibel (dB) number, the steeper the slope.

Once you set the crossover, the main speakers to subwoofer transition should be smooth.

Set up RoomEqWizard (REW) and use a frequency sweep to test the acoustic response. You will also need a computer with stereo input and output plus an SPL meter. If you are unfamiliar with REW, here’s a guide to help you get started.

Think of phase as the timing of the audio signals arriving at your ear. Different distances of the main speakers and subwoofer to the MLP will result in phase differences. Additionally, every crossover filter alters the phase to some extent.

The phase relationship can never be perfect as it varies with frequency. Your sub and speakers may be in phase at the crossover but out of phase at a higher frequency. The phase also depends on the sitting position.

However, for phase coherency, the arrival of audio from the speaker and the sub at the crossover should be optimized as phase differences are more perceptible at lower frequencies. When out of phase, the bass output will be thin and lacking.

Here is what you should know;

The phase can be set with a simple 2-way switch of 0 or 180° or a variable knob for smaller adjustments. This allows you to add electrical delay time-aligning the sub and main speakers’ bass outputs.

Ideally, the phase control should be left at 0°. Reversing the phase from 0 to 180° adds electrical delay to the bass signals by half a cycle and may not yield much of a difference.

However to set the phase, use a band-limited bass track at the crossover range and let someone else flip the phase switch back and forth. This changes the volume level. Select the loudest option.

Optimizing these settings should yield a seamless speaker-to-subwoofer transition.

Though it may seem complicated at first, with some basic knowledge and experimentation, you should end up with settings that best suit you. You can also run auto-calibration such as Audyssey to set everything for you.

What is the LFE on a Subwoofer?

LFE (Low-Frequency Effect) is a dedicated band-limited bass channel typically found on movie soundtracks. It ranges from 3 to 120 Hz. These effects are usually played back by a subwoofer.

Most receivers have an LFE output or two which may also be labeled as sub out to feed to the sub’s LFE input. The bass from the receiver’s sub-output is derived from the main channels and combined with the LFE before being routed to a mono LFE input on the sub.

80 Hz is the standard crossover frequency for most home theaters. However, the crossover can also be set higher such as 120 Hz for smaller speakers, or lowered to around 60 Hz for larger bass-capable tower speakers. The choice between 80 and 120 Hz will depend on your main and surround speaker capabilities.

0° is the default phase setting on most subs while 180° reverses the phase by half a cycle and adds electrical delay to the bass output.

What should I set my LFE crossover to?

LFE is a dedicated bass channel that is independent of the speakers’ channels with a range of 3 to 120 Hz. As such, set the LFE crossover at 120 Hz or higher for all LFE signals to be sent to the sub for playback. Setting the LFE crossover to a value lower than 120 Hz will result in the loss of some LFE information.

This should not be confused with the other crossover frequency that extracts low-frequency signals from the speaker channels and routes them to the sub.

When set to LFE+Main, your receiver routes both LFE and bass information from the speaker channels to a subwoofer that is most capable of bass playback.