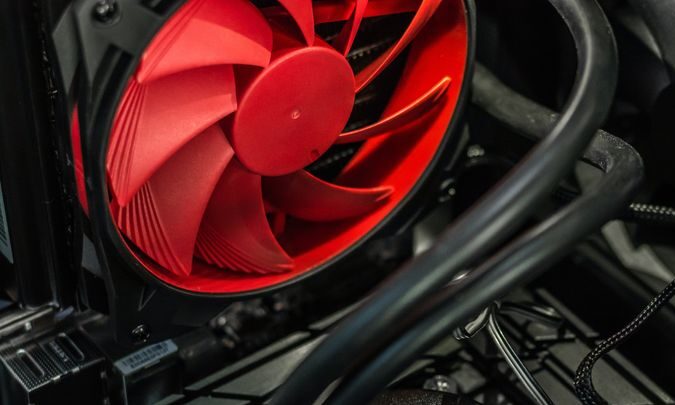 One of the biggest challenges projector owners face is fan noises. These are mainly caused by the need to cool projector lamps prone to overheating. This can be a bigger problem, especially if you are using an older projector.

Newer and high-end projectors have better cooling mechanisms and can dissipate heat better and are less noisy.

That aside, there are several reasons why your projector may be so noisy;

Causes of a noisy projector

Both poor ventilation and poor placement are the two most common culprits of a noisy projector.

Projectors need to be well ventilated to pull in cold air and push out hot air for cooling the internals and general temperature regulation within the projector. If the airflow is blocked by any means, the fans have to spin much faster for cooling, especially where the lamp is concerned.

If you can correctly place/mount your projector, you will tremendously improve the airflow and reduce fan noise.

When placing your projector, ensure that it is not too close to you as fans have to run faster at some point. The closer the projector is to you, the louder the noises will be.

High-end projectors are well built and are more efficient at cooling their internals and are significantly quieter.

The same cannot be said for most entry-level and mid-range projectors that are prone to overheating due to compromises made to save on cost during manufacturing.

However, it is worth noting that high-end super-silent projectors are way costlier.

A faulty or worn-out fan can be causing issues with overheating which makes it inefficient at cooling resulting in it having to run at high RPMs.

Faulty fans can also vibrate as they run to suck the air out.

4.      Using your projector for extended periods

Are you using your projector for long hours on end? If yes, then this may be the reason it is noisy due to overheating.

This commonly happens when you have taken a day or two off and decide to binge-watch your favorite show or some Blu-ray movies you had in store. As you do this, the internal components heat up and the fans get louder with time.

Cut back on the number of hours that you use the projector and turn it off when not using it or in between breaks to allow it to cool off.

5.      Dust and oil build-up in the fans and cooling channels

Most home theater projector users do not clean their projector’s filters and fans. Because of this, dust and airborne fibers accumulate within the projector impacting airflow and temperature regulation.

The fans thus have to work harder to let cold air and hot air out.

This not only makes the projector louder but can also damage the circuitry and other components with increased heat retention.

There are several image and power settings that can be used on a projector. These settings and modes include brightness, image modes such as dynamic and cinema, and power-saving modes such as eco mode.

Depending on which mode or setting is in use, the projector may need to draw more power. Most of this power is converted into heat hence the need for more heat dissipation making the fans run faster and louder.

Tweaking the setting and using lower settings may slightly reduce the image quality and brightness but it will go a long way in reducing fan noises as the projector does not heat up as quickly.

The fan is not always responsible for projector noises, the iris can also be the root of the problem. This is because it has to shift when in use producing audible clicking noises.

If you can get your home theater or media room dark enough for better black levels on the projected image, I would recommend turning the auto iris off to reduce any noise that may be coming from it having to shift. But as a general recommendation, you are probably better off with auto iris off.

Mount or place your projector without blocking the projector’s air vents. This will allow the projector to “breathe” better for more efficient temperature regulation and quieter operation.

A great way to achieve this is ceiling mounting the projector away from the wall and with separation from the ceiling.

Avoid placing the projector in a closed space as the fans will have trouble sucking air in and out.

The room where the projector is placed should also be reasonably cooled or air-conditioned. This will help reduce stress on the internal temperature regulation mechanism for the fans to run smoothly.

For better temperature regulation you will need to regularly clean and clear the air vents, air filters, and fans of any dust or dirt. The area around the projector will also need to be cleaned regularly as the dirt can easily get from the surroundings to the projector.

Cleaning the vent and the area surrounding the projector will be easy as you can dust or use a damp cloth to wipe clean but the fans and air filter will not be as straightforward.

Here is how you can clean the air filter;

You may need to replace the air filter if it is damaged or too difficult to clean. Also, ensure that the air filter does not come into contact with water.

How to clean the projector fans;

Cleaning the fans may be a bit tricky since it will involve opening up the projector which may also make you lose your warranty. But if you intend to clean the fans here is how to do it;

This process may differ slightly depending on the model of the projector you are using. So, you should use the user manual or online videos/manual to guide you on how you can remove the fan for vacuuming.

If the fan is damaged or worn out, you can get a professional to replace it or you can replace it yourself. This will also apply to a low-cost projector whose fan may not be as good and efficient in heat dissipation.

You will be able to greatly reduce the noises reaching you to a few decibels the farther it is from you.

If that is the case, you can also place your projector on a high-quality cooling pad to remove some of the cooling stress from the fans.

Placing your projector in any closed space including a hush box may reduce noise but will impede temperature regulation and performance.

This is because most hot air will be retained inside the box and this will do significant damage to the internal components.

However, if putting your projector inside a box is the best solution to silencing it, you should do it with air circulation in mind.

You can get better air circulation by leaving enough clearance inside the box and using fans. Dual fans will do a better job sucking air in and out.

Cut a hole at the rear-bottom of the hush box and at the front top to fit the dual fans. This is because hot air is less dense and will rise to the top of the box allowing the fan to suck the air out more effectively.

You should also remember to cut a hole in the projector’s lens. From there you can screw in the box on your wall or to a ceiling mount strong enough to hold its weight.

I would recommend getting the AC infinity Airplate cooling fans as they also come with a thermostat regulator that allows you to set the temperature at which you want the external fans to kick in and will also allow you to monitor the temperature within the box. This fan kit will cost you between $70 and $120.

With a well-built box with proper and efficient air circulation, you will not only reduce projector noises but will also reduce stress on the projector’s fan.

Using the tips I laid out to you above you should be able to make your projector much quieter.

However, if the noises sound like they are coming from other parts other than the fan and you have auto iris turned off, get the projector checked out.

Also, if you are using an old and loud projector, you should probably start saving up for a better and quieter one.

However, it is worth noting that high-end projectors that are advertised as super-quiet can cost thousands of dollars. You do not need to invest in a super quiet projector as the noise levels are usually around 30db even for mid-range projectors which can be reduced further through proper ventilation.