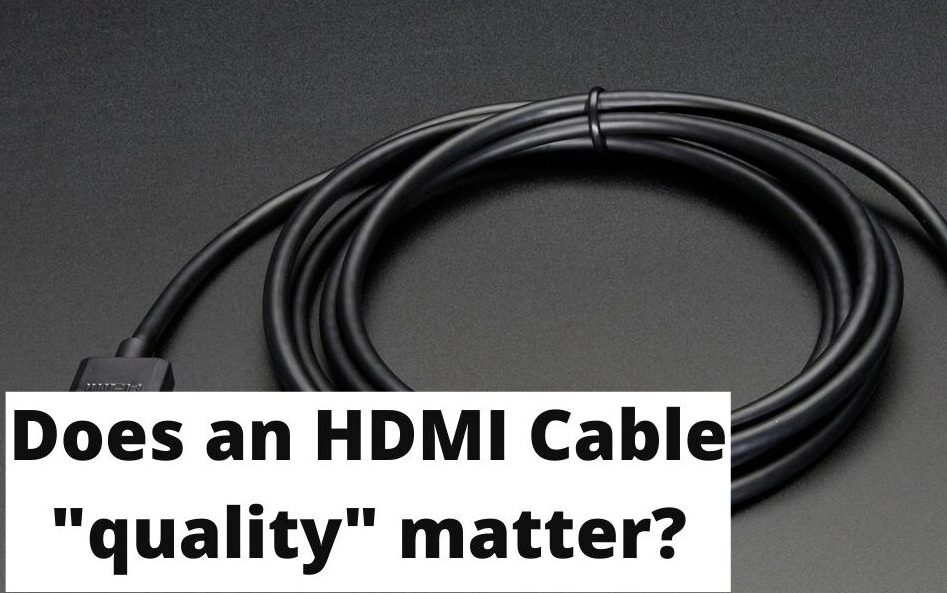 Since its inception in the year 2002, HDMI has taken over the world of audio and video transmission consumer products being used as the connector for most devices. But there have been several types and versions of HDMI cables and connectors that can sometimes be confusing when some users are shopping around.

HDMI cables can be manufactured with different materials and at different price points which gives some cables a higher-quality feel. However, the aesthetics and build quality do not affect the video or audio qualities when you are consuming content meaning that a $1000 gold-plated HDMI cable will give you the same AV quality as a cheap $10 HDMI cable.

These cables made have different shielding with one have expensive-feeling golden ends and the other may have cheaper plastic ends but when it comes to performance, this will not make much of a difference.

There may be perceived quality differences in your content due to a preconceived notion, which happens to all of us, but it is simply non-existent or negligible.

However, investing in higher-quality HDMI cables, especially for longer runs, will serve you for much longer and will be less susceptible to radio interference and physical wear and tear which are common in most home theater and media room settings.

There are considerations that you need to make when buying each HDMI cable but before we get into that we should look at an overview of how HDMI cables work.

HDMI has been around for some years now and has managed to replace most analog and digital connectors with the capabilities and the convenience that they offer in transmitting uncompressed video signals and both compressed and uncompressed audio signals between different electronic devices.

Whether you are sending a 720p or 8K video signal from a gaming console or a Bitstream Dolby Atmos Audio signal from an Ultra Blu-ray player to an AV receiver, HDMI will serve your needs.

There are other additional HDMI features such as HEC which stands for HDMI Ethernet Channel that enables you to share an internet connection between internet-enabled devices in your home theater or media room.

HDMI also comes with CEC which is an acronym for Consumer Electronics Control which is a feature that enables users to control up to 15 HDMI CEC-enabled devices using one remote controller.

All these are done through 3 or 4 data channels with varying bitrates in different HDMI cable versions by conducting electrical signals and 19 pins at each head of the cable that is responsible for different digital bits of information.

All HDMI cables work under the same principle using bits of 1s and 0s to send signals from one point to another.

From the source/transmitter, the HDMI cable takes these bits (from 100101) and rearranges them (to 111000) for a faster transmission after which the receiver takes these bits, puts them in the correct format, and decodes the information contained within them.

This is not the only way HDMI cables send information. They also send two data sets that are out of phase using multiple small copper wires. Once the receiver gets the data it puts the signal in phase to match how it was originally intended to be and eliminated noise from the signal.

Both Audio and Video signals are transmitted using this TMDS protocol at different clock rates in different HDMI cables.

What about HDMI Ethernet Channels?

This is a feature that was added with the creation of HDMI 1.4 in 2009 designed to help HDMI users share an internet connection between devices that are in the same HDMI chain.

HEC eliminated the need of having to use an ethernet cable for each of your internet devices or using a Wi-Fi connection which is slower when compared to an ethernet connection.

Internet speeds using an HDMI Ethernet Channel can reach up to 100 megabits per second which is a reliable and super-fast connection.

With this you can enjoy faster download and streaming speeds on your internet devices whether you are gaming online, watching a 4K movie, or even connecting to your home media server. At the same time, you can reduce cable clutter with a reduced number of ethernet cables.

CEC is a feature that has been around since HDMI 1.0 and was updated with the later HDMI version. It was designed so users can control up to 15 CEC-compliant devices using one remote.

This eliminated the need of having a remote for each of your devices in your entertainment system.

HDMI CEC uses a separate protocol from the Video and Audio Signal. This is the same link that is used by HEC and the signals are carried using the 17th pin which is also used by the Audio Return Channel.

HDMI is a feature that was introduced with HDMI 1.4. This feature allows audio signals to be sent to and from the source.

An example of where this feature would be useful is you use your TV for video and audio streaming but also have a receiver and speaker system for an immersive sound experience. In this case, you would connect all your other sources such as a console to the receiver and send video signals to the TV via HDMI ARC but audio signals from the TV can also be sent to the receiver for your surround system.

This eliminates the need of having to use a separate cable to send audio from the TV to the receiver while enjoying the same benefits that you would have had with a separate audio run.

However, for this to work both the receiver and TV need to have an HDMI ARC connector.

What is HDMI eARC?

HDMI eARC stands for enhanced Audio Return Channel and was introduced with the unveiling of HDMI 2.1.

It has a higher bandwidth than ARC at 37 Mbps compared to 1 Mbps found in ARC meaning that it can transmit hi-res audio codecs such as DTS-X at a higher bitrate to a maximum of 24 bits at a frequency of 192 kHz.

These HDMI versions are backward-compatible meaning that you can use HDMI 2.1 cables on HDMI 1.4 devices or HDMI 1.4 cables with HDMI 2.1 devices but with limitations in resolution and bit rates in general.

However, for the sake of this discussion, I am only going to look at HDMI 1.4 to the latest HDMI 2.1 version as they are the most relevant with today’s content and quality standards.

HDMI 1.4 was introduced in 2009 but had the same bandwidth of 10.2 Gigabits per second as the previous HDMI version but with extra features such as ARC, HEC, and support for 3D TV.

However, an HDMI 1.4 was released in 2010 and was known as HDMI 1.4a and came with two 3D formats. This was then followed up by HDMI 1.4b in 2011 that improved the refresh rate at which different resolutions could be played at.

HDMI 2.0 was first brought to us in 2013 with a higher bandwidth of 18 Gigabits per second.

HDMI 2.1 was released in 2017 with more interesting upgrades such as higher bandwidth of up to 48 Gigabits per second and support for higher resolutions and refresh rates.

With HDMI 2.1 you get support for 8K resolution at 120 Hz refresh rate and even 4K at 120 Hz. There is also an additional eARC feature which is an upgrade from ARC and supports hi-res surround-sound codecs such as Dolby Atmos and DTS-X.

And with the unveiling of Xbox X and PS5, having HDMI 2.1 can come in handy, especially for gaming in 8K.

What is the difference between HDMI CAT 1, CAT 2, and CAT 3?

How to choose a “quality” HDMI cable

Although the quality of an HDMI cables does not affect the video and audio quality as much, there are some essential considerations that you should make when choosing a cable. Some of these considerations include;

HDMI cable versions do make much of a difference as far as the maximum transfer speeds of the cables do. Transfer speeds are also known as bandwidth.

There are main categories as far as HDMI cables speeds are concerned;

Getting a premium High speed or Ultra-High-speed cable will come in handy when future-proofing a home theater or media room. You can confirm if the HDMI cable you are about to buy is any of this by looking at the certification badge on the packaging or scanning the QR code next to the speed label.

For shorter cable runs you should never have a problem with any HDMI cable but for longer runs, especially for transferring 4K content, you will need a thicker cable that should be well shielded for in-wall or in-ceiling cabling.

HDMI cable thickness is measured in AWG (American Wire Gauge) and the lower the gauge number is, the thicker the cable will be. For example, a 20-gauge HDMI cable is thicker when compared to a 26-gauge cable as will, therefore, be better for longer runs due as it reduces resistance within the cable.

As a general rule of thumb, 28 AWG HDMI cables and thinner should not be used for runs that are longer than 20 feet.

So, you are sending signals in one direction to something like a ceiling-mounted and long-throw projector that requires longer HDMI cable runs where you may need an active cable, use the standard HDMI cable as it will be better suited for most needs.

If you are playing HDCP content and have an HDCP display and source, you will also need a cable that is HDCP compliant to avoid getting an error or an empty display.

I stand by my remarks that HDMI does not affect picture or sound quality in any entertainment system.

You can only experience quality-loss if you are using a faulty HDMI cable where you may have artifacts or sparkles on your displayed image or audio drop-offs.

This is because HDMI carries digital signals that carry bits if either 0 or 1. If you have a faulty HDMI cable, it may change a 1 to a 0, and this will only affect a pixel and fill up the rest of the image for a single frame which in many cases, may go unnoticed but if the damage is huge, numerous bits may lose large amounts of data that they were supposed to transmit which will give you more snow/sparkles on your display.

Getting another cable should solve the problem but if it persists, the problem may lay with either your display or your source.

Apart from this, you should not notice any difference in audio or image quality on the same source, display, and speaker system.