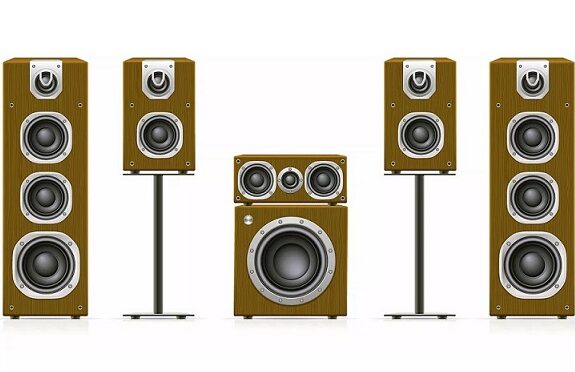 Speaker woofers and subwoofers are two pieces of equipment that most audio lovers, especially beginners find confusing as they are often used to mean the same things.

However, this is farther from the truth as there are some very significant differences between them although they are comparable in other ways.

Both woofers and subwoofers work in an almost similar fashion by pushing air to create sound pressure and use similar components. The biggest difference is the amount of air pushed by each piece of equipment and the frequencies that each is best suited to handle.

Woofers are mainly found on multiway speakers and have a frequency range that can be as low as 20 Hz to as high as 5 kHz (5000 Hz) and can, therefore, handle mid-range and bass frequencies. Meanwhile, subwoofers come in dedicated enclosures and are responsible for bass frequencies that range from 20 Hz to 200 Hz.

But before we look at woofers and subwoofers in more detail, it is crucial to understand the frequencies that they can handle.

Frequency spectrum on Woofers and subwoofers

Human beings are capable of hearing frequencies that range from 20 Hz to as high as 20 kHz but woofers and subwoofers are only able to reproduce the lower frequency band which is 5000 Hz and below.

Subwoofers are best suited for handling the following frequency bands;

What this should tell you is that a subwoofer is more of a specialized woofer that is dedicated to the bass and sub-bass frequencies. On the other hand, woofers have a wider frequency band when compared to subs.

These are frequencies ranging from 2 kHz to 4 kHz which are mainly handled by smaller woofers.

Woofers that play the upper mids can play frequencies of up to 5 kHz but are crossed over at frequencies to ensure that the response is smoother.

Upper mids is where the dialogue is most detailed and intelligible and is responsible for bringing life to audio in any sound system.

Mids or Mid-range frequencies range from 500 Hz to 2 kHz and are also reproduced by woofers. This is where you hear some of the instrumentals and vocals in a soundtrack.

Also played by woofers, low mids range from between 250 Hz and 500 Hz. These are the frequencies that carry information about the low harmonics and some warm bass information.

Bass frequencies range from 60 Hz to 250 Hz and are played by a combination of woofers and subwoofers.

There is more thumping at this frequency band.

Some larger woofers in full-range speakers can play these frequencies with no problem but it is usually recommended to add a subwoofer and cross it over at around 120 Hz for greater depth.

These frequencies range from 20 Hz to 60 Hz and are also known as the low-frequency effects or LFEs.

LFEs are mainly felt than they are heard and are usually played by dedicated subwoofers that are powerful enough to handle them as they require more air movements by the cones for higher pressure.

If you are a bass nut, you are probably aware of the vibrations and rattling caused by the subwoofer when reproducing these frequencies in effects such as earthquakes and other deeper bass effects that can be felt by the body.

Woofers are speaker drivers that are used in the reproduction of mid-range, mid-bass, and bass frequencies (20 Hz to 5 kHz).

They are made of a voice coil that is attached to a diaphragm (cone) and moves back and forth in response to an electromagnetic field created by the flow of current and in the process the cone excursion recreates sound.

The size of these woofers can range from 4” to 8” depending on the size and power of the speakers that are in use.

Woofers can, therefore, be found on speakers of different sizes ranging from small satellite speakers to 4-way full-range speakers.

Full-range speakers have 3 woofers and a tweeter for wider frequency response. These woofers can handle most of the lower spectrum frequencies from upper mids down to the bass frequencies but may not always have the flattest response at the lowest frequencies.

Some 3-way speakers have 2 woofers but these woofers may not be able to handle the lowest frequencies as well as the woofers on full-range speakers can.

Monitors/bookshelf speakers only have one woofer usually about 5 inches in size and will need a powerful sub that can handle the bass frequencies better than the woofers can. The same case applies to satellite speakers that need subs with wider frequency response.

An external amplifier usually powers woofers on smaller speakers, and these are known as passive speakers, but this is not always the case for all small speakers.

Larger speakers are usually power by built-in amplifiers which are capable of supplying enough power (watts) to the more powerful woofers. These speakers are known as active or powered speakers.

However, you should note that there is a difference between powered and active speakers which comes down to the type of crossover system that is used for the drivers.

These are the important things to keep in mind in understanding how woofers work and how you can integrate them into your sound system.

Subwoofers are specialized woofers that come in separate housings/enclosures and can push more air for higher sound pressure and more depth.

These low-end speakers have become synonymous with most sound systems from home theater, to cars and PA systems. There are paired with other speakers (satellite to loudspeakers) to reduce the strain on them making them more efficient and in the process, adding depth which is integral for a lifelike sound system.

However, to push the more air, the drivers need to be larger with diameters ranging from 8 to 18 inches. The larger the diameter, the more pressure the sub can handle.

Output on smaller subwoofers can also be increased by increasing the cone excursion but this can also increase the distortion at the lowest frequencies (the bass response is not flat).

However, this is a tradeoff that is sometimes made to reduce the size of the enclosures that have to be used to make them easier to transport. These subwoofers are usually best suited to handle frequencies above 35 Hz and this is taking into account distortion.

Efficiency is key in subwoofers as they are notorious for drawing large amounts of power most of which is wasted as heat. That is why they require more watts to be driven when compared to woofers. The better the subwoofer design, the more efficient it will be and less heat will be generated.

To improve the efficiency of subwoofers even the design of the enclosure has to be considered.

It is also important to understand how subwoofers are powered which can be either through a passive or active system.

Can a Woofer be used as a Subwoofer?

A woofer can be used as a subwoofer as it is also capable of handling the bass frequencies pretty well.

However, if you plan on using a woofer a subwoofer, you will need a great enclosure for the woofer but you should also keep in mind that you will probably experience more distortion at the lowest ends.

The frequency response on the bass frequencies will not be as good as that of a subwoofer and the depth will not be as rich. You may also experience more rattling due to distortion on the lower ends.