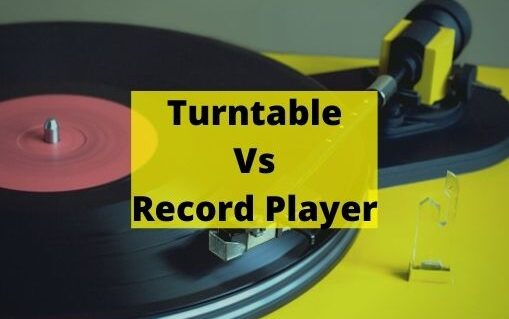 Vinyl records have been an attraction for many music lovers for more than a century now. This is even after seeing a decline in the late 1900s due to the invention of cassettes, CD players, and other digital media.

However, this is a technology that has seen a resurgence since 2008 as many people have claimed that records bring music to life.

If you have ever had a chance to listen to a vinyl record, you can tell that there is a charm to the warm, rustic tones coupled with the occasional pops and crackles which add to the nostalgia.

The records also act as physical pieces of art that can be used to decorate your listening room whether it is a dedicated home theater or a multipurpose media room.

However, if you are only starting on records and want to add a hi-fi system to your existing entertainment setup, you may have seen terms such as turntables and records players being thrown around.

Although at the core of it all record players and turntables serve the same function, to play vinyl records, they are two different things that may be confusing due to how often these terms are used interchangeably to mean the same thing.

So, what is the difference between a record player and a turntable?

A turntable is a broad term that is used to mean a plate the spins but in the musical sense, a turntable is a standalone device consisting of a spinning plate, an arm with a cartridge and stylus on its end that is used to play records but has no amplification or speakers. Meanwhile, a record player is a “turntable” that consists of other additional components such as an equalizer, an amplifier, and speakers.

Some record players can also come with radio tuners, cassette players, and CD players which make them ideal for setting up a stereo system without much hassle.

What is a turntable?

A turntable forms the basis of any phono stereo system that consists of several integral parts that are essential in playing a record. These parts include;

These are the main components of a turntable but some turntables may also come with a built-in phono preamp (preamplifier) that amplifies the phono signals to a line level which can then be output to powered speakers or a power amplifier.

The preamp is also responsible for RIAA equalization where the low-frequency signals are boosted to their original level and the high frequencies are attenuated.

This preamp can come built into the turntable or may need to be purchased as a separate device.

Pros and cons of a turntable

Because turntables are built with no additional components inside, the build quality tends to be higher when compared to record payers.

The base (chassis), the platter, and the torn arm components are made of high-quality materials such as carbon fiber, glass, and so on as the manufacturers do not focus much on the other components which you will be required to buy separately.

Coupled with the higher-quality build, turntable leave you with a lot of customization flexibility.

You can buy a phono preamp, amplifier, and speakers of your liking. The arm can also be easily changed which gives you control of how much quality you can get from your system.

Even turntables with built-in phono preamps have phono outputs that bypass the internal preamplification and EQ.

All these are important for future-proofing and a stereo system that can last you ages.

With a minimal build approach, turntables are usually lighter and more portable when compared to record players.

You can easily carry it around from one room to another or when you are moving out.

As a standalone piece of equipment, a turntable is cheaper but cannot play music all by itself.

You will need speakers that can be either powered or passive, a phono preamp, and some type of amplification if you are using passive speakers.

However, if you already have a receiver/integrated amplifier with a phono input and an existing sound system, setting up a turntable will be a cheap option but if you are building your system from the ground up or want to have a separate stereo system, it is going to be costlier to set up.

2.       Audio quality can be affected by other devices

Even with a high-quality turntable, the sound quality can be affected by other components in your sound system.

What is a record player?

A record player is a self-contained piece of equipment that can be set up easily without much hassle that comes with separate devices.

This is because everything you need to set up a phono system will already be there for you. All you will need is a power outlet to connect your power cord to a record collection.

The record player will have everything from the turntable to the stereo speakers just like Edison (inventor of the phonograph) envisioned it before it was improved by other inventors such as Emile Berliner.

Record players were commonplace during the early and glory days of vinyl records before standalone turntable became a thing.

They are less common these days but you can still buy one if you prefer a plug and play system out of the box.

Nowadays, some record players also cassette players, CD players, and MP3 players while others also allow you to bypass the internal amplification and speakers for external ones if you would like to.

Pros and cons of a record player

A record player will have the most components you need to set up your first stereo system. Most components are made to fit in one cabinet for a ready-to-use piece of equipment.

If you are building your stereo system from the ground up, a record player may be the way to go since you will have the most components you need.

This is way cheaper than building a stereo system using a turntable from the ground up but the price will also depend on the build quality as some high-end record players can cost upwards of $10,000.

3.       The built-in components are made to work together

Having all components well-integrated in a record player is done to ensure they all match can work together more effectively for optimal performance.

The components are carefully chosen and optimized which eliminates the need for matching equipment when using separate which can sometimes affect the audio quality if one of the components in the chain is not good enough.

With all components packed together, a record player is bound to be bulky and less portable.

Record players can get very heavy with weight depending on the material used to build the housing and the speakers.

Most mid-range and some high-end record players are often made with some cheap components. This is done to cut the production costs for lower costs on the consumer end and due to space limitations.

Unless you are getting a very expensive record player, you should expect compromises to be made on some of the internal components that can slightly affect sound quality.

Unless you get a record player that allows you to bypass the internal amplification and stereo speakers, you will not be able to customize your system.

This is bad news as far as future-proofing is concerned.

If one of the built-in components gets damaged or falls too behind technology-wise, you have the option to either fix it or replace the whole record player altogether. You will have no option to upgrade the internal components for something better.

Should I buy a turntable or a record player?

As you can see each this piece of equipment has its perks and some drawbacks associated with it.

The turntable should last you long with great care since we do not expect to see many changes in the record industry as it has pretty much been the same for years.

However, if you prefer an all-in-one system that is ready to play from the word go, you should invest in a great piece or record player. Ensure the components are of great quality, especially the speakers and the phono preamp.

What more; great quality is what you should look for whether you are setting up your system using a turntable or record. As I always say, treat every piece of Audio/Visual equipment as an investment and invest in what gives you value for your money.