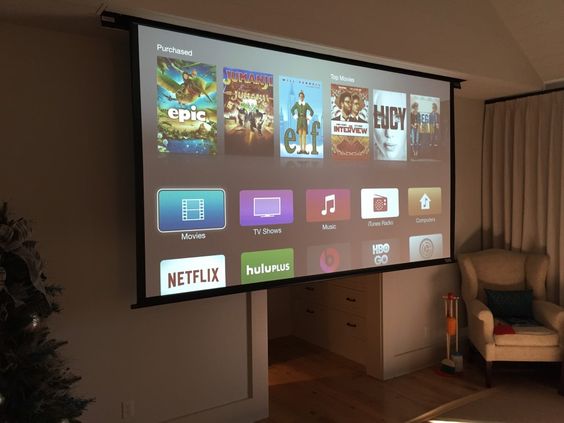 But before we go into the details of each of these options, we should look at some of the considerations to make when you are choosing a projector screen.

How to choose a projector screen

Depending on the space and dimensions of your home theater room, you can determine the right projector screen size that you need.

The projector screen should be placed a few feet above the floor (at least 4 feet) for an obstruction-free viewing angle. From the adjacent wall, the screen should leave a space of at least 6 inches. You also need to make sure that the screen is not too high to prevent strain on your neck (the viewing angle should be slightly up and straight ahead).

For example, a projector with a throw ratio of 2:1 will have an image width that is half the throw distance. So, if you were to mount your projector 20 feet away from the screen, the image would have a width of 10 feet which meaning that you would need a screen that is at least 10 feet wide.

However, because nowadays the size of most projector screens is measured diagonally, you will need to look at the width of the screen before buying.

Is a bigger projector screen better?

Large screens are better for a large room with, where you want to get everyone involved in what is happening on the display. However, bigger is not always better because with a lower projector resolution you will begin noticing pixel structure and the brightness will go down.

There are common aspect ratios common with projector screens;

A screen material/fabric with a higher gain will reflect more light to the viewer for a brighter and clearer image in a room with a lot of ambient light and vice versa. Higher gain screens are also handy when using a projector with a lower ANSI Lumen rating.

However, projector screens with higher gain values tend to be “hot-spotting” culprits. Hot-spotting is where parts of the screen appear to be noticeably brighter because the reflected light is more focused and narrower. This means that the viewers sitting directly in front of the screen will get a better image than those on either side.

Gain also affect the viewing angle with screen materials that have a higher gain value having a narrower angle and vice versa.

The image contrast is mainly affected by the color the fabric used to make the screen.

White screens are standard screens due to the ability to produce sharp, bright, and vivid images. Gray-colored screens can handle darker tones better and are referred to as high contrast screens.

Acoustic transparency in projector screens is the ability of the screen to allow sound to travel through with little to no interference. This is important if you want to put the center channel speaker or soundbar behind the screen to give the illusion of the sound coming from the screen.

For an HD resolution image (1080p) you will need a screen made of a fabric with a smooth texture for a high-quality image. 4K projectors will need screens with micro-texture surfaces (4k rated screens) for the tiny 4k pixels and better details.

Special features on a projector screen will include;

Let me expound on these functionalities in case you may be interested in the screen with any of the features above. But you should keep in mind that these features can increase the cost of the screen significantly.

Rear projection features allow the projector to project the image on the screen to the viewer from the back of the screen.

Projectors with light-resistant abilities are great for home theater rooms with a lot of ambient and help to reduce glare or washing out of the image that may be formed on the screen due to the light. Screens with these features are also known as ALR or Ambient Light Rejecting screens.

Ultra-short throw projector screens are designed to work with ultra-short-throw projectors that can be placed very close to the screen to produce an image.

Fixed frame projector screens are very popular in home theaters and cinemas and are made up of a screen fabric that has been stretched over a metal frame to be mounted on a wall. The frames on fixed frame screens are mostly covered in a black velour to improve the perceived contrast.

Some fixed frame projectors can also be curved to optimize reflectivity and add interest and style to the home theater.

There are several varieties of retractable projector screens.

Manual pull-down screens are not only easy to install but are also cheaper than most projector screens. These screens use a spring and roller mechanism to help pull or roll back the screen into the screen case.

Manual pulldown projectors can be;

Motorized projector screens are elegant screens that are housed in a metal case with an electric motor that can roll the screen up or down with a single button press. These screens will need to be connected to a power source for the motor.

Motorized screens can also be wall/ceiling mounted or ceiling recessed.

Non-tensioned screens hang down the case freely and can experience waviness and some minor ripples when in use.

Tab-tensioned screens are as close as you can get to a fixed frame screen when you are using a motorized screen. They have tabs and cables that exert pressure on the screen to make it stretch out and more uniform.

DIY screens can be cheaper but are prone to imperfections.

The DIY screen options that we are going to cover will also need you to calculate the screen size before proceeding. Also, some can be more complicated to build and get all the details right.

But let’s face it, having your own DIY screen also gives you a sense of achievement.

Let us look at them.

All you will need for this is a white wall where you can project the image, however, you will not get the image quality that other screens offer.

Here are some of the steps that you should take to turn any surface into a proper projector screen.

You will need either metal, wood, or PVC for the frame. For the screen, a white blackout screen fabric is the best option.

A wooden frame is easier to work on and is more flexible. You can staple in the screen fabric/blackout cloth or use glue or nails to fasten it to the frame.

PVC frames are lightweight but do not give you as much flexibility as wood does. To attach and fasten the cloth/fabric you will need to use glue or sew in the fabric.

Metal frames are the heaviest of the three, not very flexible to work with but are long-lasting. To attach the fabric, you will need to use 2 frame bars that should be screwed in with the fabric fastened in between them.

Here are the building steps;

You can also find more tutorials online on some of the ways you can build or improvise cheap materials to make a projector screen.

Knowing the material and the size of the projector screen are arguably the 2 most important considerations that you should make. Studying your home theater space and size of the room can help you determine the right size and material that your screen should be made of.

We have also seen that you can use the DIY option as a home theater screen though they may only always offer the quality that you can get from the other screens. But with the right skills, you can always save some money but spend considerably more time doing some handy work.