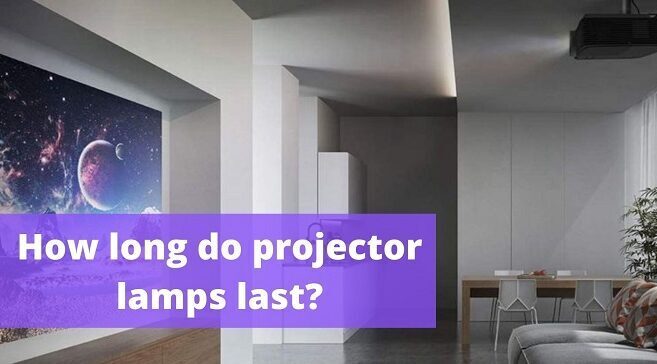 Projector lamps act as light sources for projectors allowing an image to be formed on a projection surface. Depending on the type of projector that you are using, the lamp life can vary.

Typically, most projector lamps last for between 1500 and 3000 hours but you can also find newer models whose lamps can be used for more hours before needing to be replaced. A great example of this is LED projectors which are claimed to have lifespans of over 30,000 hours.

Projector lamp technology has developed over the years and unlike the early days where one main type of bulb was used for most projectors, you can now find projectors that use technology such as lasers which last longer.

You also need to understand the difference between a lamp and a bulb as these terms are often used to mean the same thing.

A bulb is the light source that is housed in an assembly known as the lamp. In simple terms, a bulb is one part of what makes up a projector lamp although these terms are often used interchangeably.

So, which are the different types of projector lamps, and how long does each type of lamp last? Let us take a look into that.

Types of projector lamps and how long they last

Standard lamps include High-pressure metal halide lamps or Ultra-High-Pressure mercury arc lamps. These lamps usually have lifespans of between 1000 hours and 5000 hours but most of them last from 1500 hours to 3000 hours.

LED lamps are made up of a semiconductor light source that glows or produces light when voltage is applied through it.

Lamps made up of LED bulbs are smaller, consume less energy, produce less heat, and most importantly last longer. LED lamps can last for between 20,000 hours and can reach up to 60,000 hours which makes them ideal for longer use and more compact projector builds.

Laser or “light amplification by stimulated emission of radiation” is an advanced light source that is used in newer projector lamps.

These lamps are energy efficient, color-accurate, long-lasting, and need less maintenance overall. Laser projector lamps have a lifespan of about 30,000 hours on average but projectors made of laser lamps are costlier than the other technologies.

Hybrid lamps combine two or more light sources to take advantage of the benefits offered by each bulb to produce sharper, brighter, and high-contrast images. This can be a combination of two led bulbs, two standard lamps, or even a combination of laser and LED.

These lamps have varying lifespans usually between 25,000 hours and 20,000 hours. They are also made in such a way that if one of the lamps fails, the other lamp takes over but has to work twice as hard for optimal performance until you replace the failed lamp.

How to know if your projector lamp will need replacement

Check on the lamp’s health status

Many projectors have an indicator that flashes with a red or yellow-colored light when the lamp is bad or when it’s going bad. You can use the user manual to locate the indicator but in most cases, the light will flash on the projected image or at the top, bottom, or back of the projector.

If you have not experienced any loss in image quality, you can purchase a replacement and keep it until the lamp burns out or when the image quality drops.

You can also tell the lamp’s status by checking the lamp life and knowing how much life the lamp is left with or if it has exceeded the life expectancy. This can be found in the manual or on the menu under the lamp life/lamp hour option.

You can also manually inspect the lamp to check on its status by carefully unscrewing the lamp cover. Check for any signs of physical damage, burns, or a burning smell. The user manual should have guidelines on how you can remove the lamp cover but when doing this, you should ensure the projector is turned off and that it has had enough time to cool off.

Loss in image color and quality

Sometimes when the projector’s lamp is going bad the projected image may appear washed out, the contrast drops due to lack of saturation and the brightness may also drop.

This happens immediately after you turn on the projector because the lamp may not be bright enough or because it is not able to accurately project the colors. Images that were supposed to pop with color appear washed out, the image may appear muddy or you may notice that the colors are off.

Another sign of a projector lamp that may need replacement is the flickering of the projected image but may also occur after replacement if you fail to use the right replacement lamp.

If your projector turns on but no image appears, your lamp may have completely gone bad.

Sometimes the gradual decline of the lamp’s performance may go unnoticed by us as our brains are wired to compensate for any inconsistencies. This means that you may fail to notice as the image quality slowly goes down before the lamp dies.

A complete lamp breakdown may also happen prematurely even before the lamp reaches its lamp life.

Once you have determined that you need a replacement lamp, you should ensure that you buy a proper and working lamp that will be suited for you. Your budget will heavily influence the lamp that you get.

Some lamps can be cheaper than others but the price range is usually between $100 to upwards of $400 depending on the projector’s model and quality. It is common for lamps to cost half as much as the projector as a whole.

With that in mind, you should know there are two main types of lamps that you can find in the market and these are;

What is an OEM lamp?

An OEM or Original Equipment Manufacturer lamp is a projector lamp made by the projector’s original manufacturer. OEM lamps are usually made to be an exact match of the lamp that your projector originally came with and tend to be costlier than their alternatives. You can also get an OEM replacement if you are on a warranty.

Typically, OEM lamps are mainly found on the manufacturer’s website but you may also find cheaper generic lamps online that may claim to be OEMs.

Different manufacturers use different acronyms for their OEM replacement lamps such as;

They can also use bulbs from the original manufacturer but with a generic housing for the bulb to match the picture quality and performance of original OEM lamps. This means that you get an OEM alternative that is cheaper and is also half-OEM.

These alternatives come in handy if you are looking to save money or if the manufacturer no longer makes OEM replacement lamps. They can also be used as placeholders before you save up and get enough to upgrade your projector set up.

However, it is highly recommended to get an OEM replacement lamp although it may be more expensive mainly due to compatibility or quality issues. You also lower long-term maintenance costs.

How to replace a projector’s lamp

How to prolong your projector lamp life

Projectors emit a lot of heat when in use and a lack of proper ventilation can tremendously reduce the lamp’s lifespan.

Ensure that the projector has enough room for free airflow which also reduces the fan noises as they do not have to work as hard to cool the projector.

You can also reduce overheating by occasionally cleaning the projector. The fans and filters should be kept dust-free to prevent clogging of the cooling channels.

If the dirt and dust build-up on the air filter are too much or if it is damaged, replace it.

You can prolong your projector’s lamp life by using eco-mode to save electricity and reduce strain on the lamp. When using this mode, the projector will essentially use the least amount when idle.

However, this will usually make the image less bright.

4.      Allow your projector to cool down completely before moving it

Always allow your projector to cool off completely before moving it after powering it off. You should also allow it to cool down before turning it back on again.

Also, never move the projector when the lamp is still on.

Projector lamps are not the same as some are more power-efficient than others, others are brighter and others last significantly longer than others.