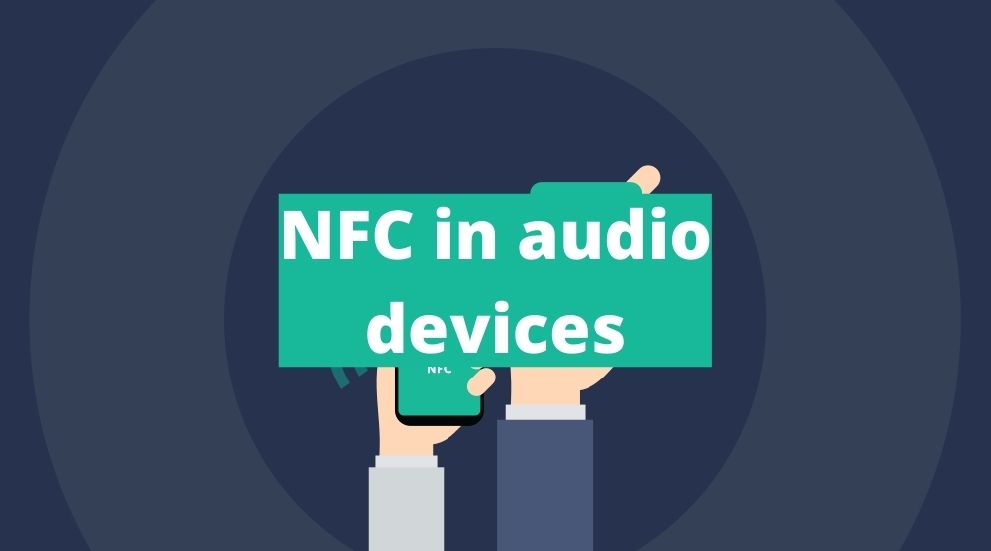 NFC or “Near Field Communication” is a short-range wireless communication protocol that can be used in Bluetooth speakers and headphones for automated pairing. This eliminates the need to manually select and pair your speaker via BT.

This technology has been implemented in most smartphones and some speakers/headphones. It can also be added to your audio device as a passive tag for pairing to another NFC device by touching them together.

NFC pairing eliminates the tedious process involved in setting up and connecting your mobile device to the speaker or headphones.

But there is much more to NFC than what is mentioned above.

What is NFC and how does it work?

NFC (Near field communication) is a wireless communication protocol that has been around since the early 2000s.

It is a subset of the fairly old RFID (Radio Frequency Identification) that uses the 13.56 MHz RFID frequency band. What’s more, NFC has a transfer rate of 106 to 424 kilobits per second (kbit/s).

This means that NFC uses radio waves for communication but at a 13 MHz frequency.

It operates at relatively close distances, typically between 0 and 10 centimeters but in most cases, 4 centimeters is the optimum distance. In other cases, physical touch is required for operation.

When two NFC devices are brought close together, they are activated and a communication channel is established between and can be used for the following;

There are two main types of NFC; Active and passive NFC.

Active NFC chips need a power source to both send and receive data. These are the chips found within smartphones. These chips have an antenna usually inside a phone’s battery or the backside case but use very little power.

Passive NFC does not require a power source but generates power by electromagnetic induction. This electromagnetic field is generated by an active NFC device and with the help of a rectifier.

An active NFC can read or write data on a passive tag to execute commands such as turning on and connecting Bluetooth.

How to add NFC to a BT speaker/headphone

What you will need;

Programmable NFC tags are dirt cheap, 10 tags (10 pc) cost from $9 to $15, on average (without adding shipping fees). The prices will vary depending mainly on storage (typically between 40 bytes and 4 kilobytes). For more commands, more storage is required. Most commands do not take up much space, usually several bytes.

The surface these tags are designed to work on also affects the cost. Most NFC tags are made to adhere and work on plastic surfaces and may be affected by interference when placed on metal surfaces.

However, some are manufactured to work on metallic surfaces with minimal interference by adding separation between them and the metal surface. These tags are costlier but still cheap nonetheless.

Depending on the surface you plan to place the tag on, you should use the information above as a guide but you don’t need much storage.

There are various apps that you can use to write data on NFC tags, the most popular ones being;

You do not need coding knowledge to program NFC tags. The apps and are straightforward to use as you only need to select one of the available options.

Using the apps you can program a tag to activate and connect to a Bluetooth device on touch (Bluetooth syncing). To do this, simply select a command (e.g “Bluetooth setup” on Tagwriter) then write it on the tag by tapping it to the active NFC device.

You also have the option to use multiple tags on different Bluetooth speakers and headphones with similar commands. This is especially handy in multi-room wireless speaker systems.

On tapping or bringing your phone close to the audio device, they should automatically connect. You can also place a tag on a Bluetooth-enabled car’s stereo system to do the same.

The tags can be re-written up to 100,000 times even for other automation needs. You can also lock the tag to prevent the written data from being changed.