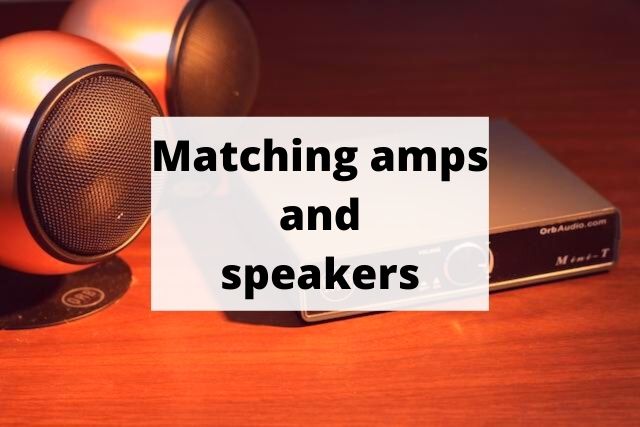 Using separates can be great for future-proofing and it also gives you the flexibility of being able to tweak your system to your liking.

However, matching and putting the various audio components together may always be as straightforward and this is especially true for speakers and power amplifiers matching.

Matching speakers and amplifiers are something that most beginner audio enthusiasts find confusing but the truth of the matter is that it is not as difficult as it may sound or as some may have you believe.

One important thing to keep in mind when selecting an amplifier for your speaker set or vice versa is to have the best possible synergy. Synergy is how speakers and amplifiers complement each other for a better listening experience.

However, the listening experience can be subjective and generally depends on personal preference and hence differs depending on who is listening to what system.

With that said, there are three main things to consider if you want to have a great and lifelike 3D soundstage and these are;

So, let us look at each of these elements to understand how they come together and how they apply to the matching of amps and speakers.

Impedance is the measure of resistance to the flow of electric current in a circuit at different frequencies and is denoted by the Greek symbol Omega (Ω) or Ohms.

Most speakers will have an impedance rating of between 6 and 8 Ohms with the exceptions of car speakers and some high-end audiophile speakers that have ohm ratings of 4.

One important thing to understand about impedance in speakers is that it varies depending on the frequency. What you are given by the manufacturer is the nominal impedance rating or the lowest average impedance for that speaker’s circuitry.

Consequently, the impedance of a speaker rated at 8 Ohms can go from as low as 4 Ohms to as high as 40 Ohms.

This variation is mainly caused by frequency resonance at lower frequencies (back EMF) and inductive reactance at higher frequencies.

Therefore, if you look at a graph of impedance against frequency, you will realize that the impedance is full of swings (highs and lows) depending on the frequency that is being played.

Thus, if you have an amplifier that is rated at 120 watts at 8Ω, the amp can only output 120 watts with an 8 Ohm load. If you double the impedance the power output is halved to 60 watts.

Consequently, if you reduce the speaker impedance to 4 Ohms, the speaker will attempt to draw 240 watts from the amplifier. This will, in turn, cause the transistors/tubes in the amp to overheat and ultimately cause it to shut down to protect it from damage (go into protection mode) or in worst-case scenarios, blow the amplifier.

With these concepts in mind, you should not pair a low-impedance speaker to an amp with a higher load impedance.

For example, do not pair a 4-Ohm amp to an amplifier with an 8-Ohm load rating as this can overwork the amp even damaging it.

There is no real danger to powering a speaker with a power amplifier with a lower impedance rating than itself.

Alternatively, you can go for an amp with an impedance switch which essentially limits the amount of current a speaker draws from the amp preventing frequent shutdowns or component damage. With this, if you have a speaker with a 6-Ohm impedance, you can toggle the impedance on an 8-Ohm amp to 4 ohms.

Speaker sensitivity is a measure of how efficiently a speaker can convert power to audible volume (sound pressure) and is measured using decibels (sound pressure) at one meter for one watt or 2.83 Volts at 8 Ohms.

Different speakers will have different sensitivity ratings depending on how efficient they are and this affects how loud you perceive them and the amount of power they have to draw to reach a said volume level.

Most speakers will have sensitivities of between 85dB and 95dB but some horn-loaded speakers can be as high as 110dB.

The 85dB speaker will be the least efficient while the 110dB one will be super-efficient and the higher the rating the lesser the wattage that will be needed to achieve a certain loudness.

To put this into context, for every increase in 3 decibels you have to double the power. Therefore, for the 85dB speaker to reach the same level as the 95dB speaker at one watt, the power needs to increase by a factor of about 10. This would mean increasing the power output from 1 watt to 10 watts.

What this means is that if you are using speakers with a low sensitivity rating, you would need an amplifier that can output more power to get to a loud enough level, especially when outdoors or with an increase in the distance between you and the speakers.

You need to keep in mind that for every meter you get away from the speakers, you lose between 3 and 6 decibels depending on the overall conditions.

Understanding sensitivity is important in deciding how much power your speaker will need which also depends on the setting where the speakers are being played. This brings me to my next point of discussion which is the power output and power handling.

Here is where things get confusing for most people which is made even worse by the fact that manufacturers are not always honest about their components’ power ratings.

This is why you need to understand the concepts of impedance and sensitivity because they directly affect how much power your speakers need.

Manufacturers often give the maximum amount of power a speaker can draw over a sustained period (RMS) or over a short burst (PMPO) without damaging them. In the case of an amp, the power rating usually shows the maximum power it can output without clipping.

One thing to keep in mind is that speakers can rarely sustain their maximum power handling capacity over extended periods without going “poof.” For example, if a speaker is rated at 100 watts RMS, reaching this amount of power or exceeding it consistently over a long time with a more powerful amp will ultimately blow it.

The voice coil may get deformed due to extreme temperature or other structures that support the cone such as the spider and the surround may get damaged due to over-excursion. Either way, too much power is bad for speakers.

On the other hand, trying to drive a more powerful speaker with a significantly less powerful amp will clip the signals when the maximum power output is reached creating an awful-sounding soundstage or may blow the amp if the speaker is trying to draw too much current than the amp’s power supply is capable of outputting.

And contrary to popular belief, clipping does not damage speaker drivers but it is the excessive power carried by these distorted signals that can damage drivers, especially tweeters that are made to handle way less power.

So, as you can see, there is no general rule as to how much power you need to drive your speakers.

Both less powerful and more powerful amps can be used to drive efficient speakers at a reasonable listening level (without clipping the signals or overdriving the speakers).

However, it is often recommended to get an amp that is rated over the speakers’ rating to compensate for the peaks but even as you do this remember to keep the volume at a meaningful level that will not blow your speakers. This also helps take care of power compressions that occur with an increase in the speaker driver’s temperature and increase in impedance.

Remember: Never overdrive your speakers or pull too much power from the amp leading to clipping. Clipping signals are uncomfortable to listen to and you will easily be able to hear the audio starting to get distorted and turn the volume down.

The final verdict on matching speakers and amps

Sometimes speaker manufacturers will have a list of the amps that can best work with those speakers for great synergy.

However, in most cases, this will not apply and you will be required to do the matching yourself.

The best way to do this is through auditioning where you listen to the amp in a room that is about as big as yours and with a good set of speakers and listen to what is best for your ears.

You should also ensure that your speakers’ impedance does not exceed the nominal load impedance that the amp can handle as this can have devastating effects on the amp.

The third thing to remember is that any amp can drive your speakers if they are sensitive enough and if you do not turn the volume too high. The difference between a 50-watt amp and an amp rated at 100 watts is 3 dB which when put into consideration, is negligible. But this does not mean that a powerful amp is bad for you, however, you need to watch your listening level carefully to prevent blowing your speakers.