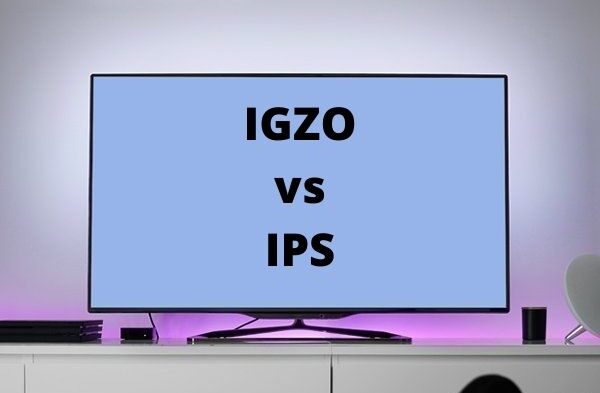 IGZO and IPS are common display technology terms. IPS is a panel type used on LCDs while IGZO is a backplane technology used in LCD and OLED displays.

IGZO (Indium Gallium Zinc Oxide) is a thin-film transistor (TFT) semiconductor material used on LCD and OLED backplanes. On the other hand, IPS (In-plane Switching) and is a type of panel used on LCDs.

Both technologies can be used on the same display. IGZO can be used in place of the commonly used hydrogenated amorphous silicon thin-film transistor (a-S:H TFT) in IPS panels to improve their performance.

To learn why this is the case and how it affects you as the consumer, keep on reading as I break down each of these terms for you.

What is an IPS panel?

As I mentioned above, IPS stands for “In-Plane Switching”. It is an alternative TN (Twisted Nematic) and VA (Vertical Alignment) panels.

This panel is commonly used on LCD FPDs (flat-panel displays) that include monitors, TVs, tablets, Nintendo switches, smartphones, and so on.

IPS panels are known for their broader color gamuts (crucial for displaying rich and accurate colors) and wide viewing angles. These are some of the features that make IPS panels better than TN or VA panels.

However, when compared to TN panels, they are slower in response. Consequently, TN panels are not as color accurate and do not have wide viewing angles. Colors on IPS panels do not shift drastically hence the wider viewing angles.

What is a display backplane?

A backplane is an assembly responsible for driving a display. This is done with the help of thin-film transistors such as IGZO, A-Si, and LTPS which determine the refresh rate, power efficiency, and resolution of a display.

These TFTs (thin-film transistors) are made up of thousands of transistors that determine how much charge goes into each pixel hence turning individual pixels on and off. This affects the characteristics and quality of a said display.

But am only going to touch on a-Si and IGZO thin-film transistors as they are related to this IPS vs IGZO topic.

Hydrogenated amorphous silicon (a-Si:H) backplanes are accredited for the huge progress LCDs have had on the market hence replacing cathode ray tube displays.

A-Si TFT is an active matrix backplane technology that was developed to improve viewing angles, resolution, and pixel density.

To improve their transparency, amorphous silicon materials have to be etched to make them as thin as possible. This allows more light from the backlighting panel to pass through them.

The lower transparency and the higher energy consumption are where IGZO backplanes get an upper hand.

IGZO (Indium Gallium Zinc Oxide) is a semiconductor material that was developed by a Japanese professor known as Hideo Hosono in collaboration with his team at JST in the early 2000s.

These are active-matrix backplanes that can greatly improve the performance in all LCD panels (IPS, TN, VA, and OLED).

This is made possible by the fact that IGZO backplanes have impressive electron mobility and can retain charge on individual pixels for extended periods on a still image. The charge retention means that a display does not have to refresh each time a new frame needs to be displayed.

When implemented on IPS and OLED panels, IGZO will offer one major advantage, high power efficiency, because of the high electron mobility, charge retention (due to low current leakage), and transparency.

With an IGZO TFT display, your handheld device can keep a charge for longer and a TV or monitor will draw less power.

The refresh rates can also be enhanced with an IGZO backplane giving gamers an upper hand when playing competitive and high FPS games.

The third main advantage is a higher pixel density. Pixel density, PPI, or pixel per inch is the number of pixels on one-inch squared of a display.

Higher pixel density can be achieved due to the transparency and high efficiency of IGZO TFTs. The transistors can be etched and made even smaller for more pixels with little loss in performance. With a higher PPI, clarity and detail levels are increased for a better viewing experience.

There is also the improved sensitivity on touch-sensitive devices thanks to the reduced noise that IGZO semiconductors offer. This is why drawing or writing on an OLED iPad mini or pro with an IGZO backplane feels more lifelike and satisfactory.

The problem with IGZO integration

The main problem with IGZO TFTs is the cost of display integration.

The methods used to deposit IGZO on backplanes are expensive to undertake and not widely adopted which when coupled with the cost of Indium and Gallium (rare earth minerals) makes the implementation of IGZO expensive. These costs are then transferred to us the consumers.

This is why the technology only has a major foothold on smaller displays such as smartphones, iPads, and so on. What’s more, the use of this material on larger displays is yet to be widely adopted.

Larger displays such as TVs and monitors that use IGZO backplanes are expensive but we can expect the cost to drop once more companies license the technology and the methods of implementation on TFTs improve and get cheaper.

IGZO is a backplane technology that can be implemented on different LCD panels such as VA, TN, and IPS. This technology can also be used on OLED devices and would greatly improve the already incredible display technologies.

Meanwhile, IPS is a type of panel that can be combined with an a-Si, LTPS, or IGZO TFT which are transistors that control the pixels on a screen.

However, we will have to wait and see whether IGZO will reach mass adoption.