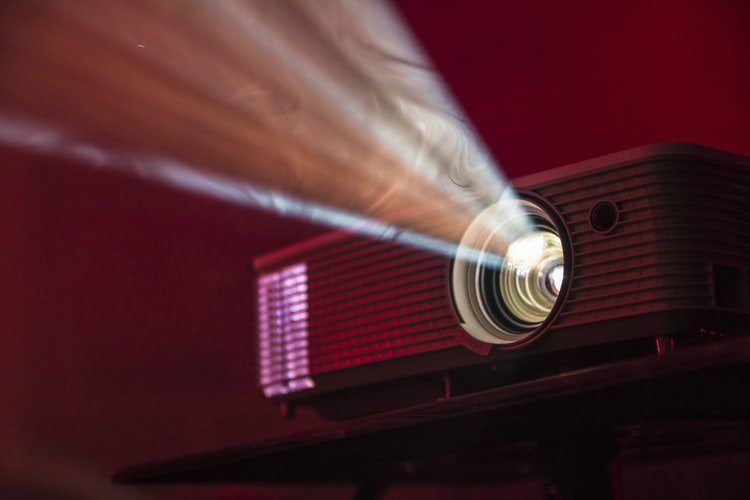 Setting up a home theater projector can sometimes be a hassle but when done correctly, it can and will outperform a TV. This is also keeping in mind that projectors are cheaper than TVs with the same specifications. However, knowing the installation steps can make everything way easier.

To set up a projector, the following are the steps you need to follow;

Buying guide for a projector and projector screen

When choosing the right projector screen and projector you should examine your home theater room. You should consider the light sources and the size of the room.

Here are 3 considerations that you should make when you are buying a projector;

The throw ratio is therefore a consideration that you should make depending on the size of your room.

On the other hand, the zoom range lets you make the projected image bigger or smaller without having to move the projector. This gives you flexibility in controlling the image size and where to place the projector if your room limits you.

Today most projectors have a zoom ratio of 1:2 meaning you can adjust the image size by increments of 20% with your zoom lens. You need to make sure that the projector’s lens can give you an image big enough depending on the size of your screen or wall and the throw distance.

I would recommend getting a projector with a resolution of at least 1080p (1920 by 1080 pixels) if you want great quality at a reasonable price. You can get a good quality 1080p projector at around $500.

However, if your budget is higher, around or more than $1200, I would recommend getting a projector with a 4K resolution (3840 by 2160 pixels). However, at this price point you are less likely to get a true 4K projector but what you are going to get is a shifting projector that fires 2 images of a lower resolution to create an image with a higher resolution. True 4K projectors will easily cost upwards of $3000. It ultimately comes down to how much you want to spend.

Also, the entry range projectors will not have HDR support for full range colors. Most of them only being capable of putting out an HDR10 image which is the standard HDR version. For a projector with HDR features, you will have to spend more.

As we have seen, when it comes to resolution, the biggest limiting factor is your budget. However, with about $500 you will get a decent 1080p projector that will serve most of your home theater needs from gaming to watching movies.

For dark home theater rooms with little to no ambient light, you should get a projector with at least 2000 lumens and at least 2500 lumens for media rooms that receive more ambient light. You should also keep in mind that brighter projectors, especially those with more than 3000 lumens are costlier.

Most projectors will be one of the following 2 types;

LCD projectors have 3 liquid crystal displays where each display handles a certain color. The 3 displays, therefore, project 3 images, red, green, and blue (RGB) which are then combined in a glass prism to create a full-color spectrum image that is then projected to the projection surface. This projector can have issues with motion blur.

DLP projectors create images by using small microscopic mirrors which are arranged on a semiconductor that is known as a DMD (Digital Micromirror Device). These tiny mirrors are angled to direct light to or away from the projector screen. DLP projectors’ lamp life is between 2000 and 5000 hours and they have also been known to cause banding/ghosting where you can see individual red, green and blue colors.

When choosing between a DLP or an LCD projector it ultimately comes down to personal preference but LCDs tend to be cheaper while DLPs have images that are of higher quality and are sharper. LCD projectors also have a longer lifespan because they have no moving parts. Each projector type has its perks and disadvantages too.

There are also other projector technologies such as LCoS, LED, and Laser.

LCoS or Liquid Crystal or Silicon projectors work in a similar way to DLP projectors but use liquid crystal instead of small mirrors to control the light. These projectors have excellent image quality but are not as light as the other projectors. Can also have problems with motion blur.

LED or light-emitting diode projectors use low energy and low heat semiconductors to generate energy which is converted into electric signals to produce light. However, LED projectors also use LCD or DLP technologies to create images but have a lamp life that can go upwards of 20,000 hours.

Laser projectors use lasers instead of lamps to produce light. They can get extremely bright and have exceptional image quality but still use LCD, LCoS, or DLP chips for image projection. Laser projectors are super expensive but the technology is still in the early stages.

Laser and LED projectors use different sources of light to the other types of projectors.

There different options that you can use as projection surfaces such as projector screen or DIY options such as painted walls or sheets.

If you decide to buy a projector screen, there are different options that you can go for;

You will also need a mount for your projector if you prefer a mounted projector and you can find a high-quality mount for about $100.

You will need to determine where to place the projector to the surface being projected on.

There are different positions that you can use for projection;

If you want to project the image from the back of the projector screen you should get a rear-compatible projection screen. In this case, the projector will be behind the screen and will produce a horizontally reversed image. You will, therefore, need a projector that will allow you to flip the image horizontally at 180° so that the image can be correctly oriented.

To project from the ceiling (can be in front or rear), the projector will need to be mounted upside down to the ceiling. In this case, the image will need to be flipped but most ceiling compatible mounting projectors will have a feature to allow you to invert the image.

Also, before drilling or cutting a hole for in-ceiling mounting, you will need to determine and measure the appropriate throw distance. We have touched on throw distance earlier in this guide, consider checking it out.

When you are looking for a spot to place your projector, apart from considering what we have mentioned above, you should also consider heat management.

This is because projectors produce heat and if they do not get proper airflow for heat reduction, they can overheat and shutdown which will also significantly shorten the lamp life. There are also cases, though few, where this overheating has been known to start fires.

You can also install fan vents for the projector if you have the skill or get a professional to do it for you.

Connect the projector to the power and media source

You can connect your projector to one or more media sources such as a Blu-ray or DVD player, Cable box, Streaming source, game console or hook up your sources to an AV receiver and then connect the receiver to the projector.

Depending on the port selection on your projector, you can either use;

You will also need to power the projector and turn it on. Once it is turned on, you should see an image from the projector (the brand logo) and then a massage showing that the projector is looking for a media source.

The projector should be able to find the active source if any is turned on but if it does not, you can select the source manually using the remote. Once the source is detected and working, you can go to the menu and orient the image correctly depending on how you have placed the projector.

Then you can proceed to the image adjustment to get the image onto the screen.

To adjust the image on your projector you should follow these steps;

Adjusting the angle of the projector’s image is useful in lining up the image with the screen.

Using the feet for angle adjustment

This will work best for a projector that is placed on a table but may not be too viable for a ceiling-mounted projector.

Most of the projector ceiling mounts will have an adjustment at the joint where that projector is hooked up. If not, there are other options to adjust a ceiling-mounted projector.

Lens shift allows you to horizontally and/or vertically alter the angle of the projected image for a uniform and straight-edged image. Other projectors may also have a lens shift that allows you to adjust the image diagonally eliminating the need of having to move the whole projector.

When you project your image on a screen it may appear distorted or tilted because the projector is not centered directly to the screen. Here is where keystone correction comes into play.

If you use the automatic keystone correction, the projector will detect and correct the image. However, if you are doing it manually, the horizontal correction buttons will align the image to the left or right while the vertical button will align it either up or down. Play around with the buttons until you get an image that makes a perfect or almost perfect rectangle.

Finally, if your image is not as good or straightened as you would like it to be, you can play around with the above adjustment until you get the best image possible. You can also tell if the image is well aligned to the screen by using an alignment image that may come with the projector or you can find and download one online.

Optimize the image quality with the settings

The first setting you should get right is the aspect ratio and you will have several options when it comes to this;

Picture modes on a projector

The next setting you should tweak for an optimal image is the picture mode and there are several options you can choose from;

Other options such as computer mode are most suitable if you have connected your projector to a computer and sports mode which alters the color, brightness and makes your sports viewing experience better.

Manual projector settings (color, brightness, hue, sharpness, and so on)

Increasing your projector’s brightness will make the image look better but will shorten the lamp life of the projector.

You can also manually set the color, sharpness, tint(hue) for your projector to your liking. Some projectors will also come with additional settings such as noise reduction, 2D or 3D viewing options, Dynamic or Auto Iris, and motion Interpolation.

Motion interpolation allows you to increase the frame rate on your projector to the maximum frame rate.

Use speakers for better sound

Let’s face it, the sound quality on most projectors is terrible, to say the least. However, you can use a soundbar or some descent surround speakers.

The soundbar can be connected directly to the projector using a cable or wireless through Bluetooth. But for a surround speaker system, I would recommend getting a receiver or preamp + amp which can be connected to the sources, the projector, and the speakers for better integration and sound quality.

After you are done setting up the upgraded sound, you can finally, sit back and watch a movie.