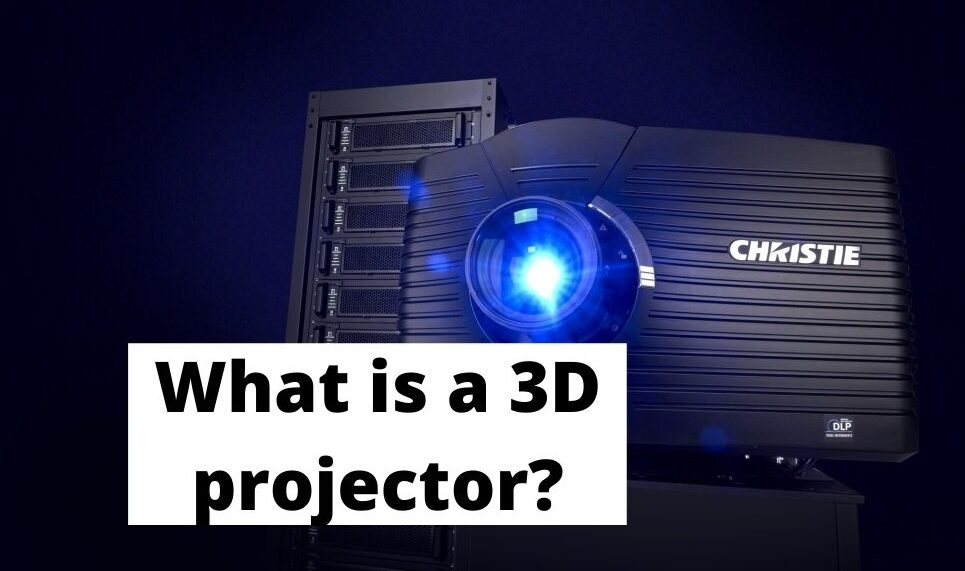 Since the first 3D movie was screened in 1922, 3D movie technology has risen and fallen in popularity, Twice.

Usually, to get the experience you would need to ticket to a theater but there is a niche group of people willing to cough out a few hundred bucks for the perception of depth at home. This means having a 3D capable display, a 3D Blu-ray player, and 3D content.

Having a 3D capable projector is your best bet to watching 3D content. 3D TVs are no longer manufactured and you can only get one used.

3D projectors take advantage of our stereoscopic vision to create the illusion of depth. The illusion is achieved by feeding two different images at different perspectives to the left and the right eyes which are then processed by our brains to make objects seem like they are flying around us.

These projectors can either be Active or Passive as seen below.

A 3D projector can either be active or passive.

Active 3D projectors display images for the left and the right eyes in alternation from left to right to left and so on. This is done at double the frame rate at a fixed resolution for each eye. For example, at 120 frames per second, each eye gets 60 frames per second.

Active shutter glasses are required for active 3D. They use chips to darken the lenses from left to right or vice versa in sync with the frames. If a frame is meant for the left eye, the right lens is darkened and vice versa.

Meanwhile, Passive 3D projectors project 2 blended/interleaved frames at once and picked up by passive glasses. These glasses only pick up frames for the intended eye. Frames meant for the left eye can only pass through the left lens and those meant for the right eye are picked up by the right lens.

For passive 3D to work, the footage needs to blend cyan and red-colored frames or polarizing light.

Glasses with red and cyan lenses are known as anaglyph glasses. The red lens only allows red light to pass through and the cyan lens filters out red light but allows cyan frames through.

There are also polarizing glasses that pick up differently polarized frames. These frames have polarized light waves projected in different directions for the left and right eyes. Therefore, one lens can only allow horizontal frames to pass through for one eye and vertical frames for the other.

For polarization, a dual projector setup is needed with each projector having a polarizing filter. A single projector with dual-polarized lenses and a special silver screen can also be used. They are both expensive to set up.

3D-ready projectors can only handle active 3D from a Frame Sequential bandwidth (1080p @120 FPS ). They only get their transmission from a handful of drivers usually Nvidia drivers. Other sources such as 3D Blu-ray players cannot work with 3D-ready projectors due to licensing issues.

Full 3D projectors can handle all 3D transmissions and are compatible with all 3D sources such as 3D Blu-ray players, Set-top boxes, 3D streaming services, computers with 3D drivers (including Nvidia), gaming consoles such as PS and Xbox, and so on.

So, what are these transmission formats?

Transmitting 3D content requires a high bandwidth cable such as HDMI 1.4 cables and up. There are 4 standard formats used for transmission and they include;

Also known as page-flip, this format transmits frames at a full 1080p resolution at 120 FPS. The frames are displayed in alternating sequence with 60 frames going to the left eye and 60 frames to the right eye.

This format is only delivered using a computer with an Nvidia 3D graphics card to a 3D ready or Full-3D projector.

Frame packing is somewhat similar to frame-sequential as it sends 2 full 1080p resolution images at 24 frames per second for each image. These frames are packed on top of each other with a narrow 45-pixel black band between them.

With side by side and top to bottom transmission, the left and right frames are packed next to each other either side to side or one on top of the other. This is done by either reducing the vertical or horizontal frames by half.

This transmission format involves interleaving two frames each for either the left or right eye into a single frame and reducing the resolution for each frame by half.

A 3D projector offers a more immersive experience compared to a 2D projector by adding the illusion of depth. However, not much content is tailored to 3D enthusiasts, especially if you live in the US where you may need region-free Blu-rays.

When compared to standard 2D projectors, 3D projectors are significantly more expensive to buy and set up. You will need special glasses and a special silver screen for polarized 3D content.

3d glasses can ruin the experience for most people, especially with the heavier active shutter glasses which use batteries and processors (chips).

Discomfort issues are also common with 3D and can range from dizziness to headache. This mainly happens with active 3D due to the flickering effect, especially if the projection and the shutter on the glasses are out of sync.

3D projectors need to be brighter than 2D projectors. They should have at least 3000 lumens as the brightness may be halved by the glasses when filtering the frames for the left and right eyes.